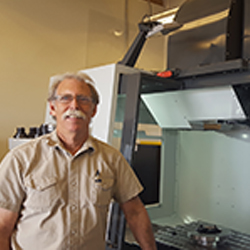 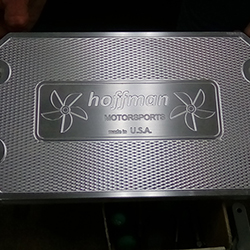 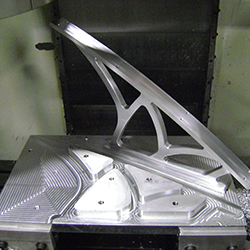 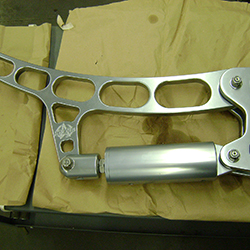 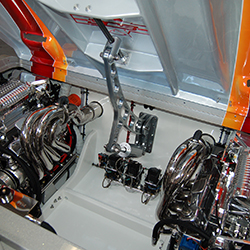 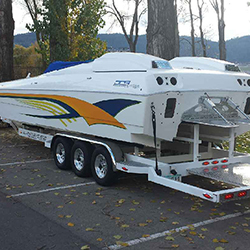 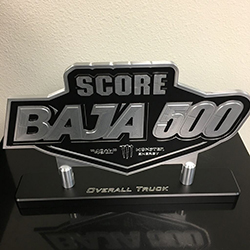 Striving for perfection can be an act of futility, but if you ask experienced manufacturer Rich Thompson, he’ll tell you that perfect parts are the only kind worth making.

“If it looks like something you can make in your garage, I don’t want to make it,” says the owner of Thompson Machine from within his spotlessly clean El Centro, Calif., shop. “I like to make parts as well as I can make them and take pride in what I do, and I’m definitely a perfectionist.”

As a career manufacturer who’s primarily been his own boss since 1982, Thompson has deftly reinvented himself in response to changing circumstances and unpredictable markets.

While the road to ongoing success has included a few bumps, business is currently booming at Thompson Machine, which is based in a quiet business park ringed by desert and stark sunshine.

“The biggest benefit to customers that I have to offer is quality,” Thompson says. “The old saying is that you get what you pay for, and that’s one of the reasons that high end parts are what I like to make.”

Thompson fell in love with manufacturing the day he walked into a machine shop, which was two days after he graduated from high school in 1974.

“I thought it was awesome from the very beginning,” Thompson says with a customary grin than belies the intensity with which he applies his craft. “The fact that you’re creating something out of a block of material, and that it’s useful to someone, that’s a big deal to me.”

While Thompson produces a range of products in a variety of materials — such as aluminum, steels and Inconel — he’s made a specialty of manufacturing custom aluminum parts for super-powered catamaran-style boats that bear price tags of $200,000-$500,000 and reach speeds of up to 175 miles per hour. Many of his custom jobs, such as hydraulic actuators for the opening and closing of compartments, are for Dave’s Custom Boats of El Cajon, Calif.

Thompson produces a significant number of parts for the geo-thermal energy sector and industrial power plants, for which he manufacturers high-end valves, valve components, pumps, and more. Many of his parts require tight tolerances, some as tight as .0001”, 20 times smaller than a human hair.  He also has a great deal of experience in turning out natural gas meter bodies, a process that requires strict testing and documentation.

“We made 8,700 meter bodies in a three-year period and fewer than five of them were rejected, so the care that we took to make them correctly paid off,” he says.

To manufacture his wares, Thompson has used the SURFCAM Traditional computer-aided-manufacturing (CAM) solution, by Vero Software, since 1999.

“We realized we needed to come up with something different that no one else in the Imperial Valley had, so we got CNC machines to stand out from the competition. I never regretted my decision because SURFCAM Traditional will do anything that you want it to do,” Thompson says.

“In 1999, when I first started learning SURFCAM, I did not even own a computer; I was basically computer illiterate. I had some training, and in no time was producing quality G-code for my machines. SURFCAM Traditional has a mind-boggling number of features, and extremely useful help tutorials, videos, and shortcuts. I am still discovering some of them to this day. The trick is to try them and then apply them as needed to your current jobs. The analytical and CAD/CAM possibilities in SURFCAM still blow my mind. It's really a lot of fun when I figure out how to use a function that I had never used before and then I think, ‘Man, that makes it easy.’”

In addition to using SURFCAM Traditional to program parts designed by customers, Thompson uses the system to create new designs and inventions of his own.

“That’s one of the things I love about SURFCAM: It allows you to design something for the customer and change it along the way.”

In the past, Thompson employed a staff of up to about 20 and ran an arsenal of machinery, but today he runs a one-man shop — with some help from his wife, Valerie, who doubles as a CNC operator. The couple runs two mills and two lathes, including a brand new super-speed Haas mill that allows the machining of parts larger than Thompson was able to make before.

“I have a really creative side, but if you don’t have the tools to make it halfway easy, it can be too difficult and time consuming to act on that creativity,” Thompson says. “I have the machinery I need, and SURFCAM is the tool that really allows me to play and try new things.”

Many of Thompson’s custom boat parts bear a notable “bling factor,” as evidenced by those finished with a diamond-engraved pattern. He’s currently in the process of producing nine-piece battery-box assemblies for Dave’s Custom Boats that include the high-end diamond finish.

To create the finish, Thompson uses the zig pocketing option in SURFCAM Traditional, which enables him to make a “zig” crisscross pattern by going over the area to be “diamond-engraved” in two different directions. For pocketing, Thompson chooses from among the zig, zag, zig-zag, milling and spiral options to customize his cycles to the parts that he produces.

“Zig is a fantastic option for pocketing, especially if you’re trying to create a specific, one-of-a-kind result,” he says.

Another artistic custom boat add-on that Thompson was able to create with SURFCAM was a hydraulic trim tab assembly featuring script and artwork that included a series of detailed playing cards. To machine the design, Thompson used the 2D contour cycle in SURFCAM, which enabled him to use a font from his font collection for the text and to engrave the complex artwork. With the playing cards, he was able to engrave on a line and pocket at an angle.

SURFCAM Traditional’s contour operation cuts along the contour of a boundary, and allows users to cut on the left side, right side, or on top of a contour. Users are also able to remove the material between the edge of the material and a contour, and can perform roughing and finishing operations separately, or in a single operation.

To quickly remove large amounts of material from his parts, Thompson takes advantage of the software’s Z-roughing cycle, which generates toolpath designed specifically for material removal in preparation for additional operations.

The Z-roughing cycle uses a 2-axis (X,Y) pocketing cycle in Z-axis increments, which is an efficient method for removing material from around a part before performing finishing operations. The Z-roughing option can also be used to remove large amounts of material from within a cavity.

Thompson also relies upon the analytical tools provided by SURFCAM Traditional to closely inspect part features before the cutting begins.

“SURFCAM has amazing analytical capabilities, and sometimes I use the software to create a radius just to see how far it is from point A to point B,” he says. “The analyzing features are fantastic, especially for the lathe work.”

Thompson enjoys sharing his machining knowledge with the next generation of machinists, and plans to continue expanding on his love of machining by branching into other markets.

“The old guys like me, we’re dinosaurs, and we have to pass our knowledge on,” he says of teaching other manufacturers what he’s learned in his 43 years on the job. A natural inventor, Thompson is also in the process of designing new creations that reflect some of his hobbies, including hunting and off-roading.  He and a local shop owner, a former employee, recently programmed and machined trophies for the 2017 Baja 500, a popular off-road race.

“There are products that I know I can make that nobody else is making, so there is opportunity there,” he says. “SURFCAM will help me get there. I lean on SURFCAM, and It never lets me down.”