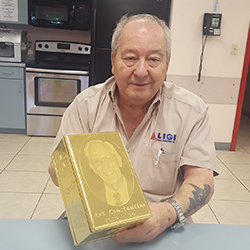 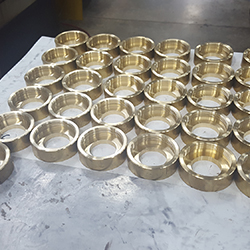 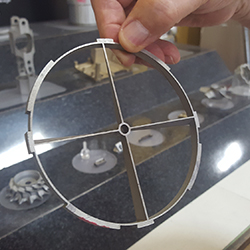 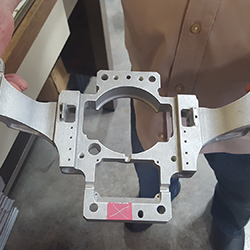 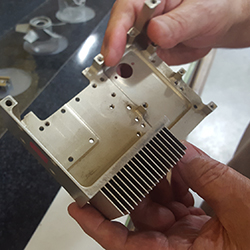 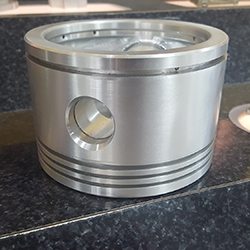 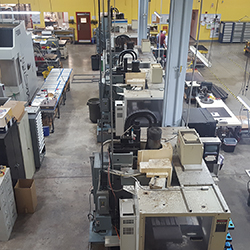 A man of many talents, machine-shop owner Domenic Mucciacciaro knows a thing or two about everything from algorithms and machining precision parts to the perfect cup of coffee and the way biscotti should be made.

A visit to his 43,000 square-foot facility reveals that LIGI Tool & Engineering, Inc., based in Deerfield Beach, Fla., is both a precision job shop and Mucciacciaro’s home away from home. His daughters, Lisa and Gina — for whom the company is named — sit side-by-side at the company’s reception desk, and the second floor includes a gym and a guest room.

Today, the company uses 17 CNC machine tools to perform precision turning, wire EDM, 5-axis milling and mill-turn machining on a wide range of parts made mostly of plastics, aluminum and steel. No industry is off limits to LIGI, which produces products primarily for the electronics, energy, and aerospace industries. The company also offers design capabilities, which is often a benefit when it comes to securing new orders.

“Designing gives us a lot of advantages — including the chance to make the part first,” says Mucciacciaro, who, closing in on 40 years in business, credits his success to commitment to quality and a willingness to embrace technology.

“You have no control over what kind of technology you need to have because your customers control you. If you don’t have the machinery that you need to make what they want, you have to go out and blow some money on a new machine,” Mucciacciaro says. “You keep buying more and more equipment, and just keep getting bigger and bigger.”

"Anything you can put on a computer screen, we can machine it with ALPHACAM.”

To program its range of CNC machinery, LIGI Tool & Engineering, Inc., has used the ALPHACAM computer-aided-manufacturing (CAM) solution, by Vero Software, since 1993. Mucciacciaro had purchased his first machine tool, a Hurco mill, in 1984, after which he programmed all of his parts by hand for nearly a decade.

“I would write all of the code on a legal pad and punch it all in, and I would make a lot of mistakes, like putting in a 4 instead of a .4. Back then, you’d press the button on the machine and step back —  just in case,” he says.

In 1993, Mucciacciaro purchased a Fadal machine tool and struggled to program the new equipment by hand.

“After a week, I still wasn’t done with one program for one part,” he explains. While in the midst of trying to program the new machine, a chance encounter with an ALPHACAM salesman led to a software demonstration.

“He showed me the software and I said, ‘We’ve got this part that we can’t program. If you can program the part, I’ll buy your software.’” The salesman, who hauled in a desktop computer for the demo, was able to program the part in a few hours and ALPHACAM had found a home at LIGI.

“Back in the day, it was 500 to 600 lines of code for a simple part, and now we write programs with 300,000 lines of code,” says Mucciacciaro, who owns 10 seats of ALPHACAM and has trained almost all of his 20 shop staffers to use it. “I’ve looked at other software, and I think ALPHACAM is the simplest to use, and the best for us.”

To begin a job in ALPHACAM, the LIGI team typically imports a solid model into the solution, which easily handles common file formats, such as .dxf, .dwg, IGES, and a variety of solid model formats to ensure compatibility with a wide range of CAD systems. For its design work, the company uses the SOLIDWORKS® computer-aided-design (CAD) system, by Dassault Systèmes.

“In the beginning, customers would give us paper drawings and, when fax machines came out, they would send everything by fax and we’d have to tape it all together,” Mucciacciaro says, highlighting some of the significant process changes he’s seen throughout the years.

Among other tools, the team at LIGI utilizes the pocketing, drilling, contouring and engraving capabilities of ALPHACAM, as well as the solution’s ability to machine complex surfaces via specialized machining strategies.

The software’s advanced solid simulation includes full machine build, which ensures that toolpath can be verified before it’s sent to the shop floor. With clamp and fixture collision detection, programmers can be assured that accurate code will protect their machine-tool investments.

In addition to using ALPHACAM to program complex precision parts, Mucciacciaro has used the solution to develop some of his innovations. With 15 patents under his belt and going strong, he continues to materialize his ideas with technological help.

One of his inventions is Ligiography™, or the practice of using a special algorithm to turn photographs into pictures on metal by drilling holes of varying depths and diameters. An application for this invention is the machining of pictures, derived from photographs or other graphics, onto urns made of gold-plated aluminum. Along with engraved details about the deceased, pictures on personalized urns are designed to be lasting keepsakes.

The algorithm was developed to work in conjunction with ALPHACAM, which programs all of the drilling operations.

“Anything you can put on a computer screen, we can machine it with ALPHACAM,” Mucciacciaro says.

“Without the 3D engraving in ALPHACAM, we couldn’t engrave nearly as easily and we wouldn’t get the 3D effect,” says Mucciacciaro, who uses the solution’ parametric scaling capability to scale lettering up and down in size. “Before we got ALPHACAM, I would do the engraving myself, and that took a lot longer.” ALPHACAM’s parametric capabilities work on any shapes that need to be changed in size while retaining original design integrity.

Mucciacciaro oversees details big and small to ensure that his shop runs like a well-oiled machine, from choosing the right CAM system to equipping each machine-tool station with its own specially-assigned calculator and marker.

Born in Italy, Mucciacciaro immigrated at the age of 9 to the U.S., where he was raized in Connecticut and ultimately joined the military. After he was honorably discharged, he completed training to be an electrician, but ended up landing a 4-year apprenticeship in a machine shop for 92 cents an hour. When the apprenticeship was over, he opened his first machine shop, which closed its doors four years later.

After relocating to Florida, Mucciacciaro dabbled with the prospect of owning a landscaping business, but again found himself on a shop floor.

“The problem was that every shop I had been in was like a dungeon, and it was very depressing,” he says of his last job before again choosing to strike out on his own.  “It was always dirty, and there were chips all over the place.”

One day, Mucciacciaro walked out of the job at Noon and never went back, and that’s how LIGI Tool & Engineering, Inc., was born. It’s worth noting that LIGI is bright and clean, well organized and the opposite of everything that Mucciacciaro disliked about the machine shops in which he worked.

“I got a mill and put it in my garage and, after six months, I was able to get a 1,000 square-foot warehouse,” he says, surveying the large, bustling shop floor of LIGI Tool &Engineering. “I hired people and bought CNC machines — and I was always partial to the latest technologies because I knew that we needed them to be efficient. You can’t afford not to have vision in this industry.”

“Anything you can put on a computer screen, we can machine it with ALPHACAM.”