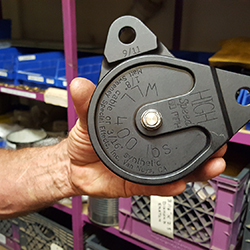 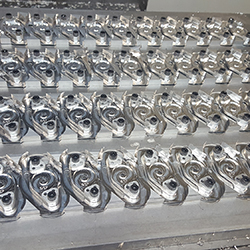 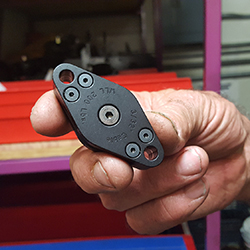 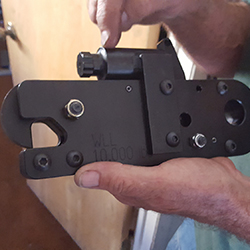 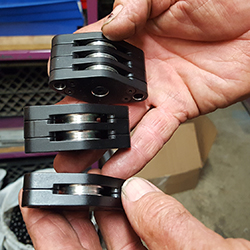 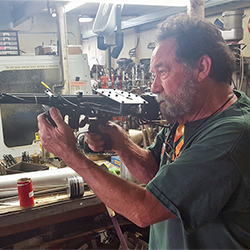 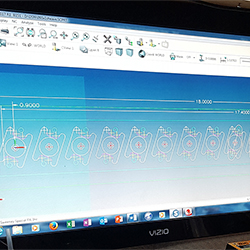 Making a living in the film industry can sound like a lot of glitz and glamour, but long-time special effects specialist Matt Sweeney knows exactly how much work goes into creating the perfect illusion.

Retired from a long and successful career as a special effects supervisor, Sweeney now devotes all of his time to Matt Sweeney Special Effects, Inc., the business he founded with late wife Lucinda Strub in 1984 to manufacture vital components and accessories for special effects artists.

“I went 40 years without hurting anyone, and I feel really good about it,” says Sweeney, who runs his small shop and crew — including a puppy named Xena —from an industrial neighborhood in Van Nuys, California. “It’s a fun job, but it’s pretty stressful because you don’t want to hurt anybody. We build things that we trust with our own lives — and that’s why people buy from us.”

Born and raized in the San Fernando Valley, Sweeney began his special effects career when the studio system was alive and well, and when movie studios operated their own welding and metal shops. Sweeney met Strub — a pioneering female studio carpenter and special effects specialist —  the day he walked onto the lot of Universal Studios in 1973.

Sweeney’s film credits are many, and include the likes of The Goonies, Lethal Weapon II, The Lost Boys, Arachnophobia, The Color Purple, Natural Born Killers, Apollo 13, three of the Fast and Furious films, and many more. Among Strub’s credits are the classic science-fiction gem Logan’s Run.

Sweeney and Strub’s foray into manufacturing began with the protoype of a now 25-year-old special-effects pneumatic capsule  gun that creates dust-and-spark bullet-hit effects without the deafening report or danger of a real firearm. The enduringly popular product — Sweeney has sold about 400 so far — prompted the pair to continuously expand their equipment lineup to make production of the gun easier.

In the early 1990s, Sweeney made the switch to CNC and purchased the SURFCAM Traditional computer-aided-manufacturing (CAM) solution, by Vero Software, to utilize rapidly evolving machinery and increase overall efficiency.

“Getting SURFCAM helped us to expand our abilities, and it was the kind of thing where we’d take on a job and say ‘I better learn this software if I’m going to be able to pull this off,’” Sweeney says. “It turned out that SURFCAM was easy to use and I really took to it right away; it was just great.”

Sweeney, who uses SURFCAM Traditional to design as well as to program his parts, produces a range of pieces that are typically made to be used and not seen. Machined in aluminum and finished in black, products include items like diamond high-speed snatch blocks — sheaves with swiveling cheeks that allow users to place the blocks on cables already in place — in various sizes.

“There’s a lot of enginering and a lot of testing, and our working load limits are such that the cable will break before the product does,” says Sweeney, who machines in 2.5 and 3 axes.

Elevator sheaves, used to covertly open and close elevator doors, are another popular product, as are large pulleys used to pull vehicles together to create collisions, or to make vehicles crumple inward. Quick releases, like the kind Sweeney used to drop a flaming gasoline tanker behind Mel Gibson and Danny Glover, are an item used in many industries, including industrial testing, stage shows and magic acts.

Sweeney has stuck with SURFCAM Traditional throughout the years because it’s user friendly and includes tools that help him to consistently produce superior products. “SURFCAM is like a stripped-down hot rod: It’s so powerful and has everything that I need without a lot of useless bells and whistles. It’s just really user-friendly, intuitive software.”

Sweeney enjoys the flexibility of SURFCAM, which offers two “transform” functions that allows him to easily modify and manipulate drawing geometry and generate or edit toolpaths. Once a part has been drawn or imported into SURFCAM Traditional, programmers can easily transform the job to include multiple identical parts. Because Sweeney makes many of the same parts on each fixure, he uses SURFCAM to essentially copy and paste the drawing geometry.

The software offers several methods for transforming toolpaths, including “rectangular array” — which allows users to easily create rectangular grids of multiple parts — and “mirror,” which generates mirror images of the parts and associated toolpaths.

One of SURFCAM Traditional’s specialized roughing cycles is the Z-Rough cycle, which uses two-axis (X and Y) tool moves in Z increments to remove large amounts of material in preparation for additional operations.

Likewize, the Plunge Rough operation quickly removes a large amount of material with feed moves in Z only. This toolpath includes a series of overlapping plunge moves are made that remove cylindrical plugs of material. Due to the axial strength along the machine tool spindle, high feed rates than can be maintained with X and Y moves.

“With the special roughing and pocket milling cycles, I found that the end mills last ten times as long,” Sweeney says. “They go a long way to helping you get more use out of your tools.”

Sweeney also trusts SURFCAM to help him perform lights-out manufacturing, which helps him to reserve valuable shop time for other tasks. “I’ll load the program, send it off, and then have it turn itself off when it’s done,” he says. “It saves time and helps me make the most of the equipment.”

For Sweeney, part quality is far more than a matter of pride in a job well done. Making products designed to protect lives under potentially unpredictable circumstances means that is no room for mistakes.

“Lives rely upon everything that we do, so it’s important that we get it right — and we do,” Sweeney says. “When they’re rigging a guy to fall off a building, they have to know that everything is going to work.”