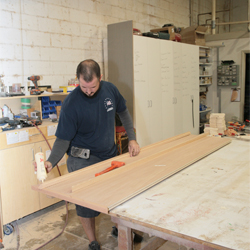 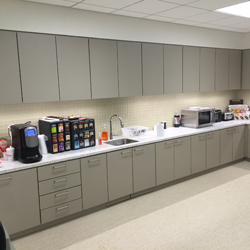 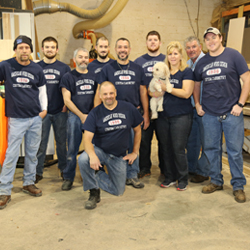 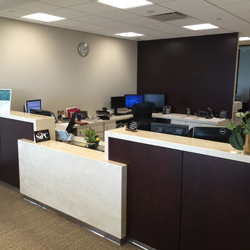 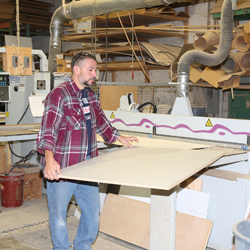 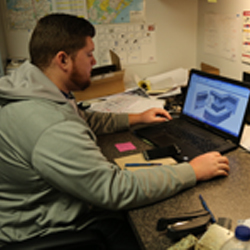 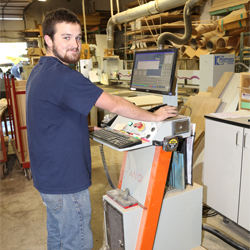 American Wood Design, Inc., of Claymont, Delaware, specializes in commercial projects — including the occasional residence — and millwork that has been outsourced by other millwork companies.

“We are considered somewhat of a millwork job shop, but that’s only a portion of our workload,” says Michael Gilhool, Jr., project manager and estimator for American Wood Design.

Gilhool’s father, a career woodworker, founded the company — originally dubbed Michael Gilhool & Sons — in 1996. Michael Gilhool, Sr., spent his first year in business toiling away at night on the second floor of an office building where his wife was employed in a doctor’s office.

The company has since relocated to a business park, where it has steadily grown in both square footage and staffing since 1997. It has also made a policy of embracing technology to remain competitive since acquiring its first panel saw in 1996.

“Right now, our business runs fully on the nested based CNC that we have because of how automated it is,” says Michael Gilhool, Jr. “We have implemented a lot of automation, and we would like to have even more.”

The road to automation was initially paved with good intentions, but somewhat disappointing results. The business was still drawing designs by hand in 2013, when the company acquired AutoCAD® computer-aided-design (CAD) software, by Autodesk®, to speed up the process. Gilhool was creating shop drawings and shop-floor mechanics were producing all the company’s products by hand when Gilhool’s father encouraged him to take a look at other, more advanced options

"When you compare what we’re doing now to what we were doing two years ago, it’s night and day. A good amount of credit is owed to CNC and CABINET VISION for helping us to know that we can continue to be more efficient.”

“My dad wanted me to go out and get a feel for what was out there,” Gilhool says. “We were making ends meet, but it wasn’t totally working money-wize. The impression that we got was that, if we wanted to be in this game, we needed to become more efficient.”

After researching the CAM market, Gilhool concluded that it was time for an upgrade and the company purchased the CABINET VISION design-to-manufacturing solution, by Vero Software, in 2014.

“You need a good CNC machine, but you also need a good software to drive all that it does,” Gilhool says. “One thing that we do a lot of in CABINET VISION are reception desks in lots of different finishes. A lot of what we use CABINET VISION for is taking existing CAD drawings, importing them into CABINET VISION, and then drawing right on top of those drawings to do all the engineering.”

Specifically, Gilhool requests 2D AutoCAD drawings from customers, and those drawings are then converted to DXF files and imported into CABINET VISION.

Prior to acquiring CABINET VISION, staff would storyboard projects by hand, a process that is lengthy and prone to error.

“Now, when a project comes out in CABINET VISION, we already have dadoes and holes, and everything else that we need in position before it goes out to the shop floor,” Gilhool says, adding that the software’s flexibility enables him and his team to edit shapes, along with a laundry list of parameters.

“We are a very custom shop and we wouldn’t want any limitations,” he says. “We are also able to create standards for the way that we do certain jobs, and we built up a database that includes construction methods.”

Gilhool and his team also take advantage of User Created Standards, or UCSs, within CABINET VISION. Written in basic if/then statements, UCSs are ideally applied in instances where a certain method or preference is used repeatedly. For instance, if a particular type of material is always cut a certain way, a UCS that specifies a particular cutting method can be automatically applied when that material is used to reduce programming time. UCSs also help with standardizing procedures on and off the shop floor.

“The hard part is putting all the information in before you start a job,” Gilhool says. “As long as it goes out there right, we’re much more efficient that we ever were in the shop. It really helps you to know exactly what we need and then have it there before it goes to the CNC.”

Today, the American Wood Design team has three seats of CABINET VISION, as well as a network key, which ensures that any changes made during the programming process are universal.

“Now, there is so much more work being done in the office, which is where it should be done,” says Gilhool, who notes that his brother, CNC Operator Jimmy Gilhool, would travel repeatedly between the shop floor and office to make programming tweaks — a practice disruptive to work flow.

“We’re really putting standards into place now,” Gilhool says. “Things change and we’re very custom, but we’ve created a database that we can use. We have a lot of different construction methods and a lot of materials. We produce it exactly the way we see it in the drawings, and we do it the way the customer wants it done.”

Gilhool appreciates that CABINET VISION allows him to import textures, and says that the ability to produce detailed renderings is a big boost when it comes to conveying the project prior to fabrication for architects or end clients.”

“There’s big a pretty big response to us having 3D drawings,” he says. “We get a lot of compliments on our drawings.”

Gilhool also uses CABINET VISION to insert architectural plans into shop drawings to centralize all the data for a project so that the installation process is hassle and error free.

“Before we got CABINET VISION, I would bid a job, we’d close out that job I’d get a report that would say ‘We should have charged more for this job,’” Gilhool says. “I still see the profitability once a job closes and it’s definitely better than what we were doing before. We were really breaking even or making a little money, and now we’re making profits on our jobs.”

Those profits are a reflection of greater efficiency, as well as a reduction in man hours and material waste.

Gilhool notes that American Wood Design is continuing to improve as it learns how to fully take advantage of all of the tools available in CABINET VISION. The company plans to expand in both square footage and personnel, and will continue to invest in CNC equipment and software.

The company’s investment in software includes support from the CABINET VISION community, which offers a help forum populated with knowledgeable users.

“There are some real CABINET VISION wizards out there who are very willing to help,” Gilhool says, adding that the support he receives from CABINET VISION staff is top notch.

“When you compare what we’re doing now to what we were doing two years ago, it’s night and day,” he says. “A good amount of credit is owed to CNC and CABINET VISION for helping us to know that we can continue to be more efficient.”

“When you compare what we’re doing now to what we were doing two years ago, it’s night and day. A good amount of credit is owed to CNC and CABINET VISION for helping us to know that we can continue to be more efficient.”