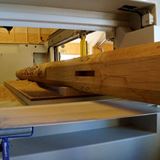 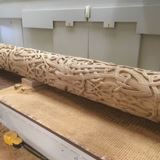 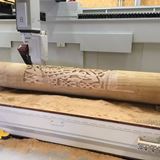 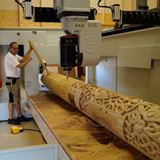 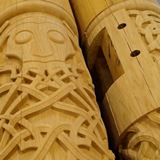 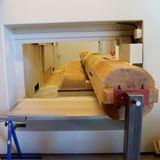 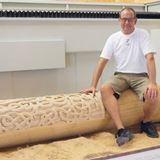 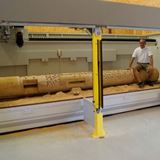 A woodworking company wasn’t phased when an intricate eight-metre part was too big for its machine tool – it simply built a door in the side of the machining center and supported the piece outside by mounting it on a cradle.

Bystrup Maskinsnedkeri programmed its CMS Ares 6018 with ALPHACAM to cut authentic motifs into carved pillars for a Viking museum at Lejre, near the city of Roskilde in Denmark. The Land of the Legends is a 106-acre archaeological open-air museum, recreating typical Viking buildings showing how the warriors lived between 900 and 1,300 years ago.

"It had to be right first time, as there were only four pieces of material for the finished pillars. We couldn’t afford any mistakes."

A project is underway to rebuild one of those buildings, the King’s Hall, measuring 60 metres x 12 metres, and ten metres high, containing four solid oak pillars to hold the roof. The pillars are each eight-metres tall, decorated with intricate and complex motifs from Nordic mythology, showing the Nordic Gods Thor, Odin, Frej and Freja, depicting how the Vikings saw and adored their Gods.

The contract to cut the motifs into the pillars was awarded to Bystrup Maskinsnedkeri, a small company with just two employees, based at Svendborg in Denmark. Managing Director Niels Bystrup knew that even though the designs were extremely intricate, he would be able to program his machine tool with ALPHACAM to easily and successfully cut the solid Oak.

But there was an initial physical hurdle to overcome before the ALPHACAM programs could start cutting wood. While each pillar weighs 1000 kg and has a diameter of 450 mm, it was the eight-metre length that caused an issue, as the 5-axis CMS Ares with its Fanuc 31B controller is only 6000 mm long.

He made a door on the left side of the machine, and the part rests on a cradle outside. Without the door, the part could not have been loaded.

“The machining area in X was sufficient to have the area to be worked on inside in one go,” says Niels Bystrup. “But as our CMS Ares doesn’t have a rotary table, the upper half of the pillar was machined first, then it was turned 180 degrees to machine the other half.”

Prior to the job beginning, Neil Bystrup was in close contact with ALPHACAM’s Danish reseller, Østjydsk CAD-CAM. Karl Erik Andersen, from Østjydsk CAD-CAM, says: “We worked extensively with Niels Bystrup on test programs, and loading the ‘heavy’ solids, as the program file size for just half a pillar was 250 Mb.  Jobs like this must be considered carefully, as there couldn’t be any trials. It had to be right first time, as there were only four pieces of material for the finished pillars. We couldn’t afford any mistakes.”

The pillars are made of “’Navy Oak,’ from trees planted 200 years ago, when Britain took over the Danish Navy. “At that time, the King of Denmark ordered new trees to be planted, so they could build a new Navy. Now the trees are ready, but, of course, ships aren’t built of Oak any more. So the trees are used for other purposes.”

The decorations were created by the museum, based on original designs found in graves and excavations in Denmark and Norway. Bystrup Maskinsnedkeri received them as STEP files, which were imported into ALPHACAM. The designs sank into the wood to a depth of 25 mm, and were machined with small ball nose cutters, which were required to achieve the necessary detail.

The cutting time for each pillar was around 70 hours, meaning that the overall machining time for the project was more than four weeks.

Having invested in CNC and ALPHACAM’s specialist 5-axis Ultimate module around two and a half years ago, Niels Bystrup works with it on wood, plastic and Sika Block. As well as the CMS Ares, the company also programs a recently acquired Fanuc Robodrill with ALPHACAM, mainly for machining smaller components.

In conclusion, Karl Erik Andersen says: “The story only leaves one question – did the Vikings really have ALPHACAM and CNC machine tools 1,200 years ago, when the originals were made?”

“The story only leaves one question – did the Vikings really have ALPHACAM and CNC machine tools 1,200 years ago, when the originals were made?”