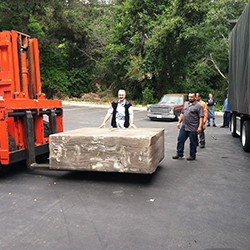 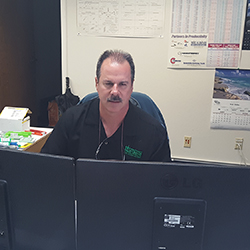 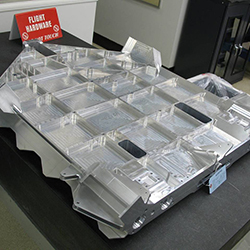 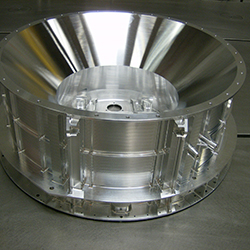 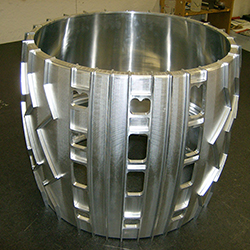 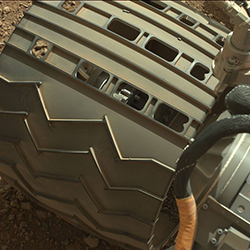 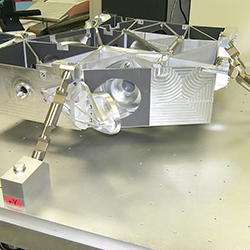 Manufacturing on a Grand Scale

Maintaining tight tolerances on large precision parts is no easy feat, which is one of several reasons that manufacturers shy away from projects of the massive variety.

Such is not the case with Tapemation, a 55-year-old Scotts Valley, Calif., company that specializes in manufacturing a wide range of large parts —  including precision pieces that ultimately make their way into the reaches of space.

“We specialize in the crazy stuff that no one else wants to do,” says Lead Programmer Rick Hobbs, who has been with Tapemation for 18 years. “There are very diverse industries that we work for, so there’s an absolute variety of work.”

Nestled in the redwood-populated foothills of the Santa Cruz mountains, the company tackles its unique projects with a crew of 25 and a mechanical workforce of two vertical lathes and 12 three and 5-axis mills — the largest of which offers 20 feet of travel.

“The large pieces that we do are most often prototypes, and we do very little production,” says Hobbs. “Many of our customers are repeat clients, but some wander in for one-of-a-kind jobs.”

The manufacturing of aerospace prototypes for both space-flight and ground support is typical of the jobs undertaken at Tapemation, as are pieces for the architectural, energy, and defense industries. Among its unique projects are an aluminum cross lattice made to support a custom glass ceiling in a mansion, as well as a titanium keel for a sailboat. Many parts manufactured by the company are in in orbit, some on the moon and on Mars, among them Descent Stage and the wheels for Mars Rover Curiosity.

The company, which is ISO certified for aerospace work, also manufactured parts for Stratolaunch Systems, a subsidiary of Vulcan Aerospace. The Stratolaunch system makes it possible to launch spacecraft from the bottom of aircraft at high altitude; Tapemation manufactured prototypes for gear used to attach the two vehicles.

“The stuff that comes through here is amazing, and I very rarely get bored,” Hobbs says. “I’m amazed at the changes that have taken place in programming since I started.”

To manufacture its diverse array of precision parts, Tapemation has used the SURFCAM Traditional computer-aided-manufacturing (CAM) solution, by Vero Software, for the past 20 years.

“Prior to SURFCAM, they used to have to prove everything out on a piece of foam before cutting metal,” Hobbs says. “It used to take us at least 10 times as long to program and verify a project as it does now.”

One of the challenges to manufacturing large parts is the acquisition and handling of massive pieces of material. While scrap is a negative in any shop, great pains are taken at Tapemation to avoid scrapping what would ultimately amount to thousands of pounds — and sometimes tens of thousands of dollars — of waste.

“Sometimes the material has a two or three-month lead time because it’s a custom casting, and a single forging can be 15,000 pounds,” Hobbs says. “When you have a $50,000 piece of material that took months to get here, scrap is not an option.”

Hobbs credits the strength of SURFCAM Traditional toolpath verification with helping to ensure that error-free code is sent to the machine. Verification allows programmers to simulate whole programs, or to run verification on individual toolpaths and, or, setup.

“Verification in SURFCAM is amazing because being able to verify toolpath and compare it to the model is extremely helpful in making sure that we’re on the right track,” he says. “I almost never get to complete a program before the part goes to the machine, so I have to be able to verify toolpath as I go, against the as machined SCMOD file. It’s not the ideal way to do things, but it often happens, and SURFCAM helps us to make sure that mistakes aren’t being made.”

The ability to color code various elements of programs as verification is run helps Hobbs to quickly and easily identify any problem areas.

In the past, Hobbs and the company’s two additional programmers would occasionally make the mistake of removing too much material during the roughing stage, which left no remaining material to complete finish passes. Hobbs explains that continuous verification improvements made to SURFCAM Traditional over the years have created reliable programming fail-safes for users.

When the company manufactured aluminum wheel prototypes for the Mars Curiosity rover, the project required achieving a very thin wall section and whittling 350 pounds of aluminum down to seven pounds. The wheel required three different lathe operations, and lots of mill work, which amounted to 14 different machine setups and about 100 hours of chip time.

Hobbs, who explains that machining large parts is “part experience and part feeling,” notes that challenges related to heat are significant hurdles in the manufacturing of massive workpieces.

“Thermal expansion is a major challenge, so if you don’t have good temperature control, it will kill you,” he says. “We often have to do multiple roughing operations because the parts change shape and size during the process.”

Hobbs and his team take advantage of the 3-and-5-axis milling features within SURFCAM Traditional to create their precision parts, including the Z-level roughing strategy. The Z-rough cycle performs tool movements along the X and Y axes, using Z-axis increments to remove large amounts of material.

Many users also take advantage of SURFCAM’s Z Finish toolpath, which is capable of cutting multiple surfaces by using a two axis (X and Y) contour cycle in Z-axis increments. The Z Finish cycle is best utilized for cutting surfaces or areas that are steeper or close to being vertical.

“Two of the biggest capabilities in SURFCAM that we use are multi-surface 3-and 5-axis milling, and the 3-axis roughing features,” Hobbs says. “Those cycles have been vastly improved over the years, and today you have much better gouge control, and you can cut multiple surfaces with much greater overall toolpath control.”

Tapemation also uses SURFCAM Traditional’s TRUEMill machining cycle, an optimized roughing toolpath that can be completed with a one-step 3D roughing through pre-finishing operation. The toolpath creates uniform step height across all surfaces, regardless of how many tools are used. It also removes material at significantly faster rates, and at greater depths of cut.

“The three and five axis capabilities of SURFCAM have come so far, and that’s really improved a lot for us,” Hobbs says. “SURFCAM makes the entire process so much easier, and we know that what’s being sent to the machine is going to result in the best possible product.”

Business: The manufacturing of large, precision-machined parts and fabrications for high technology requirements