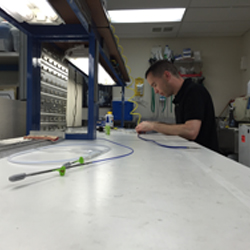 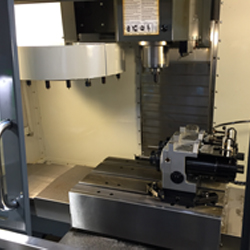 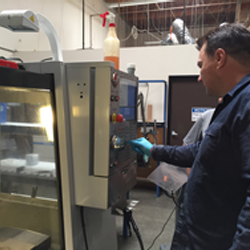 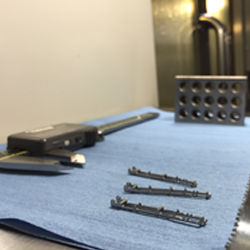 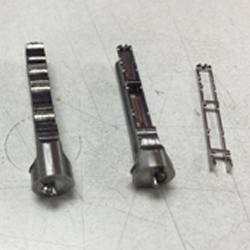 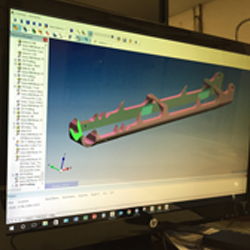 While the building easily blends in with its neighbors, a stroll through its front offices reveals workers garbed in white and intently gazing into clean-room microscopes. This is clearly an indication than something exciting is afoot.

“We’ve developed a set of instruments that we use for incision-less surgery, which is surgery without making any incisions in your abdominal wall,” says Chris Earley, USGI’s senior director of engineering.

“The instruments are inserted endoscopically, into the patient’s mouth, down the esophagus and inside the stomach. The fact that you can do surgery on the stomach without making any incisions in the abdominal wall provides patients with a less invasive approach compared to other available procedures.”

The United States Food and Drug Administration is presently reviewing the safety and efficacy of USGI’s medical devices prior to commercial use in the United States.  In the meantime, the system is being used primarily in Europe — where regulatory approval, via a CE Mark —  has been obtained, and the Middle East.

Caric is tasked with production of the precision components, in addition to quickly machining prototypes and discovering, testing and implementing new methods for continuously improving cycle times and product quality.

Once attached to tubing required for insertion and manipulation, the diminutive stainless steel instrument assemblies manufactured by Caric are inserted into the stomachs of patients. The four-piece assembly resembles a tiny alligator jaws with sharp, tiny teeth, and includes top and bottom jaws, a manifold, and a swivel. The dimensions of the completed assembly are 1.5” x 0.20 x 0.20”, and Caric describes the pieces as “small, parts with tight tolerances that are difficult to machine.”

To program the precision parts, Caric opens the SolidWorks file into the SURFCAM computer-aided-manufacturing (CAM) solution, by Vero Software. Caric has been with USGI for eight years, and was an experienced SURFCAM user and medical-parts manufacturer prior to being hired by the company.

USGI had utilized the SURFCAM Traditional solution since the company’s inception and, with Caric at the helm, reaped significant production gains throughout its use. In 2015, USGI made the switch to an all-new version of SURFCAM, which includes new cutting-edge capabilities that are helping USGI take those gains even further.

“One of the main attractions of the new SURFCAM is that I’m able to load  CAD files natively without translating them,” Caric says. “There’s no translation required, which allows me to generate much smaller code and higher quality toolpaths. It allows me to generate NC code that goes into GO2s and GO3s on curves and splines instead of innumerable lines of XYZ code.”

Because the new SURFCAM is CAD neutral, it delivers error-free interoperability with any of the major CAD systems. The lack of need for data translation eliminates error, ensures that the solid model and associated toolpath remain identical to the original design, and supports the generation of concize and accurate code.

USGI recently implemented the latest version of SURFCAM, which Caric says has delivered even greater flexibility, efficiency, and machine control than previous versions of the software. Since the implementation, Caric has improved cycle times and is now making greater use of the company’s machinery.

Though USGI houses three mills, a Haas VF-1 carries the lion’s share of the workload.

“Some of my components have a .0005” tolerance on three different datums. Being able to efficiently and coherently manipulate toolpaths is vital to making good parts,” Caric says. “Having the new and improved software that we have, I was able to do more of what I wanted to do all along.”

Utilizing drills as small as sixteen thousandths of an inch and end mills as large as three sixteenths, Caric is able to operate the Haas at feed rates higher than those he was able to use in the past because of the control he has gained over his machinery.

“Having this kind of control allows us to machine these parts at rates of speed comparable to machines costing two to three times as much.”

SURFCAM has helped USGI to save money on capital expenditures by maximizing existing equipment, and has also ensured that manufacturing remains in house.

With the latest version of SURFCAM, USGI has seen an approximate 20-30 percent cycle-time reduction, in addition to a steep decrease in deburring activity as a result of increased part quality.

“Over the years, we’ve been able to reduce our cycle times from close to two hours down to 10 and a half minutes because of more efficient toolpaths,” Caric says. “We used to spend up to 30 minutes deburring these parts by hand, and now we spend just two or three minutes. Less handling is more time savings, and we have a better quality part.”

Caric also takes advantage of the user macros functionality within SURFCAM to further maximize programming time. Because SURFCAM records and stores data from previous jobs, it helps the user to save and reuse information and best practices. Users are able to easily add custom macros to automate consistently repeated processes.

“Macros save me a lot of trouble and redundancy in entering information that has already been performed on this job or prior jobs,” Caric says. “Every time I do a process revision, I find ways to make them much more efficient.

“We have the process dialed in to the point now where we take a solid bar of stock, put it inside the collett, push the button, and the finished product comes off the machine almost ready to go to assembly.”

SURFCAM has helped USGI turn its revolutionary ideas into reality with greater efficiency, and with enough flexibility for Caric to machine high-quality components exactly the way he wants to.

For Caric and the whole USGI team, the goal of delivering quality translates into the best possible results for those who will benefit most from the company’s product.

Business: The development and manufacturing of instruments for incision-less surgery