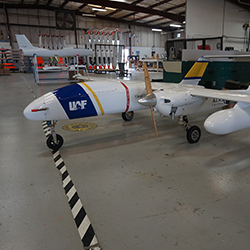 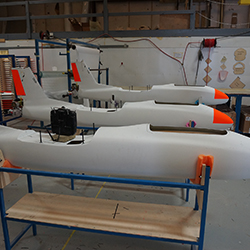 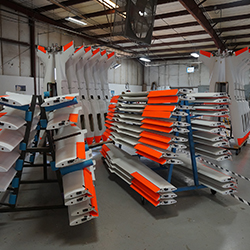 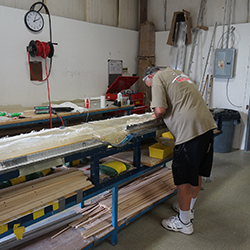 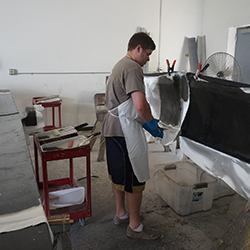 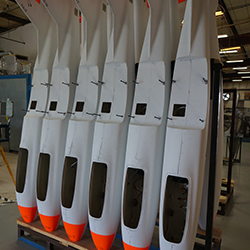 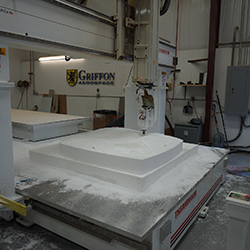 Manufacturing products created just to be destroyed is all in a day’s work at Griffon Aerospace, which turns out high-precision remotely piloted aircraft destined to be shot down by the U.S. military.

“When it comes to making targets, we take everything from the cradle to the grave,” says Greg Chando, senior design engineer at Griffon, based in Madison, Ala. “For a missile operator to be qualified, they have to shoot down our aircraft during training.”

Griffon produces 25 to 60 training targets per month for the U.S. military and, while the targets comprize a significant portion of Griffon’s workload, the company specializes in designing and producing a range of remotely piloted aircraft — including those used to transport various
payloads.

“It’s rewarding in that we get to see the fruits of our labor more than many other manufacturers do,” says Chando of the Griffon team, which produces products made only of composite materials, such as fiberglass, and uses MDF, foam, wood and plywood to manufacture those products.

Chando joined the Griffon team in 2008, when he was brought aboard to help manufacture a then-new Max Launch Abort System, or MLAS.  While it was part of a program that was eventually canceled, the MLAS was conceived as a replacement or alternative to the standard launch abort tower, as found on the Saturn V rocket.

“I appreciated the opportunity to get my hands dirty,” Chando says. “All of my experience up to that point was theoretical, so that was my first experience in hands-on manufacturing.”

Griffon’s aircraft — with wing spans of 10 to 22 feet — require tolerances of 20 to 30 thousandths on parts bonded with paste adhesive. Producing such high-precision parts with tooling developed by hand was a frustrating and error-prone endeavor.  Typical projects require the production of prototypes complete with wings, fuselage, and components that require upward of 15 unique tools.

Though the Griffon team uses SOLIDWORKS® computer-aided-design (CAD) software, by Dassault Systèmes, to design the tooling, final products were never as accurate as the CAD model.

“No matter how good you are, you will never get the theoretical mold line exactly the way you want it to if you are working by hand,” Chando says. “It was extremely complex and time consuming.”

When the Griffon team was awarded the job of designing and prototyping a new type of target in 2011, the company decided it was time to update construction methods employed by the company since its inception more than a decade ago. To create its molds, Griffon had been paring large blocks of foam down to a wood and PVC pipe framework by hand, with the use of a carving knife and sanding blocks.

To update its processes, Griffon acquired a 5-axis CNC Thermwood router, and Chando was assigned the task of finding the right computer-aided-manufacturing (CAM) software to drive it. After conducting some informal market research, Chando ultimately chose the SURFCAM Traditional solution, by Vero Software.

“I called all of the local machine shops, and everyone had nothing but good things to say about SURFCAM and CAMCAD Technologies,” Chando says. “They basically told me we were crazy if we didn’t get SURFCAM 5-axis from CAMCAD Technologies.  From the solution to the customer service, the people I spoke with said that everything was great.”

Chando stresses that a CAM company with a high level of reliable support was a must-have, especially considering that Griffon had never before worked with CNC machinery or software. He has found the level of support he needed with SURFCAM reseller CAMCAD Technologies, which assisted Griffon throughout the implementation process and beyond.

“What I was looking for more than anything was good customer support because I had never machined anything in my life — and I knew I would need the support. When I have to turn something around in two or three days, it’s very helpful to know that there is support there.”

It was evident as the Griffon team embarked upon building the new target that implementing CNC would result in vastly improved efficiency.

The addition of CNC machinery and SURFCAM Traditional also ensured that Griffon is able to manufacture all of its components without outsourcing, and to produce those parts more quickly than ever before. There were many instances in which outsourcing components would delay Griffon’s projects by two weeks, or more.

“The capabilities of being able to machine everything in house is what helps us so much, and I can make a part in a day,” Chando says. “I can’t overstate the value of time saved by being able to create parts that fit perfectly the first time.”

With SURFCAM, Chando can also rest assured that the integrity of his SOLIDWORKS solid models will be reflected in his CAM programming and the final product.

“Being able to take the CAD model and develop a mechanical mounting scheme is very valuable because we know it’s going to fit,” he says. “Having a router, we can create tooling very quickly. If the structure changes, we are able to very quickly modify the CAD model and go to the machine to cut it.”

One of its first jobs following the implementation of SURFCAM Traditional, Griffon manufactured female molds for parts used to build a carbon fiber composite body for a Formula SAE team.

Formula SAE (currently SAE International and formerly the Society of Automotive Engineers), or FSAE, is a collegiate design and engineering competition in which teams of college students test their skills against teams from competing colleges.

Parts for the composite body were made by Auburn FSAE participants, with help from Griffon, and Chando produced the molds using 5-axis simultaneous machining.

In addition to simultaneous 5-axis milling — whereby tooling is able to reach the workplace from five different axes — the shop utilizes indexed 5-axis (or 3+2) milling, which means that the cutting tool is locked into a specified position as cutting takes place. A typical benefit of both 5-axis milling and 3+2 milling is that the tools used can be shorter and more rigid, which means that faster feeds and speeds can be used.

“It’s so much nicer than the old days of making a template out of cardboard and trying to mount it to the aircraft,” Chando says. “The guesswork is gone and I know that the quality and accuracy are there.”


This story was published in the March 2017 edition of Aerospace Manufacturing and Design: http://www.aerospacemanufacturinganddesign.com/article/hitting-the-bullseye/

Business: The design, manufacturing, testing, and flying of aerospace vehicles