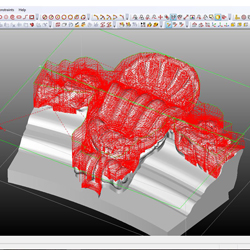 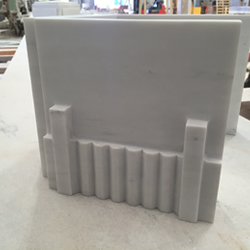 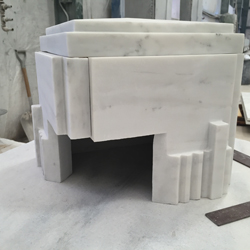 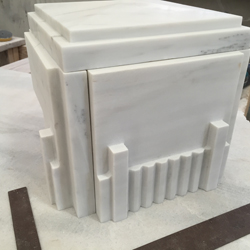 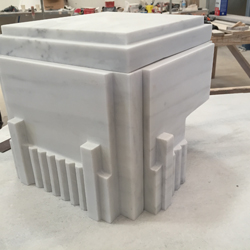 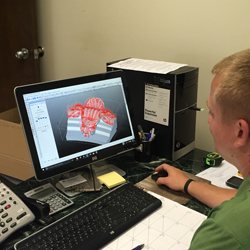 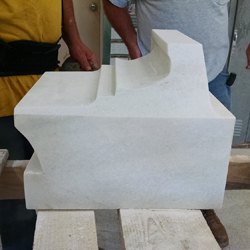 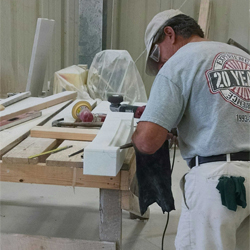 If you’ve ever been called to jury duty or stood in line at a majestic old post office, you’ve probably been face-to-face with Tennessee marble and never even knew it.

“Tennessee marble is probably in every post office that’s over 25 years old in the United States, as well as in a lot of courthouses,” says Ryan Cole, production and project manager for the Tennessee Marble Company of Friendsville, Tennessee.

As the only active quarrier of Tennessee marble in the United States, the Tennessee Marble Company holds the proverbial keys to the kingdom when it comes to the marble in its moniker. As such, it is the go-to resource for authentically preserving and restoring aging buildings constructed with the material.

Among notable American structures that include Tennessee marble are the National Gallery of Art, the Smithsonian, the Jefferson and Lincoln memorials, the Washington National Cathedral, and the U.S. Capitol Visitor Center.

Founded in 1993, the Tennessee Marble Company is a family business that owns and operates six quarries in Tennessee. Described by the company as “dense, durable, distinctive, and water-resistant,” Tennessee marble is found only in Tennessee, and is available in earthy pinks, brown, gray and beige. In addition to its one-of-a-kind Tennessee resource, the company deals in Vermont, Alabama, Colorado and Georgia marbles, as well as in limestone from various U.S. locations.

Grand Central Station, in New York City, and the beloved Griffith Observatory, in Los Angeles, are among the lengthy list of those that have gone under the Tennessee Marble Company’s restorative knife — or, more accurately, saw. A visit to the company website reveals a list and accompanying photos of several high-profile restoration projects.

While the lion’s share of the company’s jobs entail everything from precision patchwork to detailed restoration, new projects do come calling every now and then. Cole estimates that the Tennessee Marble Company is hired for new construction projects every couple of years.

To manufacture complex shapes for its one-of-a-kind products, the company uses the ALPHACAM computer-aided-manufacturing (CAM) solution, by Vero Software, which has enabled it to completely eliminate outsourcing.

“Having ALPHACAM gives us a lot of intricate work that in the past we would have to sub out to another company, or take a lot of time to do ourselves,” says Cole, who has been with the company for seven years. “Before ALPHACAM, we did a lot of this by hand. We had guys who were really good artists, and they did all of the carving.”

Prior to 2014, when it acquired ALPHACAM and a 5-axis GMM CNC saw, complete with a B-axis head, the company had never used any type of CNC equipment or CAM software. Going the CNC route enabled the company to keep all of its work in-house while performing the workmanship required to do justice to its ornate restoration projects.

ALPHACAM was used when the company was asked to replicate an entrance to New York’s famed Bergdorf Goodman building with its Alabama white marble. To recreate the doorway, a laser scanner was used to collect data on site, which provided dimensions far more exact than any that could be taken by hand. An STL file was created with the subsequent data, and that file was imported directly into ALPHACAM.

Two-dimensional and 3D geometry can be manually entered or imported into ALPHACAM, which supports DXF, DWG, IGES, and STL files, as well as the newer generation of solid file formats.

“That project included a lot of carvings, floral pieces and scrolls,” Cole says. “We try to limit our work to what we know and to what we do really well, and projects like this are within our area of expertize.”

Cole and his team take advantage of ALPHACAM’s contouring capabilities to create their intricate workpieces. In ALPHACAM, 2D geometries can be contoured using any shape or size of tool. The profiles of form cutters are created within the software, and the diameter and programming depth points of those profiles are can be controlled.

The Tennessee Marble Company also utilizes ALPHACAM’s 3D engraving functionality to create or recreate intricate pieces. With ALPHACAM, conical tools can be used to 3D engrave any artwork with a technique similar to contouring.

The difference between engraving and contouring is that, when the tool comes to a point during the engraving process, the tool is pulled out of the part towards the point and then back again. This process leaves a sharp corner, which is often referred to as embossing.

“In the past we would have said ‘Hand it over to our hand finishers,’ and now we do almost everything on the machine that we can first,” Cole says.

Cole notes that the pocketing capabilities of ALPHACAM are among the features most utilized by the company. In ALPHACAM, a closed geometry can be pocketed with an unlimited number of closed geometries, or islands, left standing inside of it.

As the software has full look ahead, ALPHACAM will remove as much material as it can without gouging the part. If a pocket is incomplete because the tool used is too large, a smaller one can be subsequently selected to remove the material left behind.

ALPHACAM remembers the residual material and pockets only in these areas instead of retracing the path followed by the first tool and cutting air. A helical tool path can be used to plunge the tool into the part at the start of the cut if required because of the nature of the material being machined.

Programs at the Tennessee Marble Company range from minutes to hours, as cutting marble can be a very slow, painstaking process. In some cases, the marble in question is cut from a 20-inch piece down to a 3-inch piece, with 1/16-inch or 1/32-inch shaved off at every pass.

To maximize manufacturing time, Cole and his team rely upon ALPHACAM to help them perform error-free lights-out manufacturing.

“ALPHACAM has given us a lot of flexibility,” Cole says, “to where we can work at night and not have anyone here. It has allowed us to do a lot more, and to have more freedom in how we do it.”