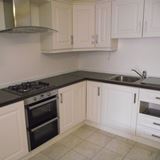 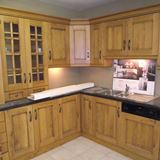 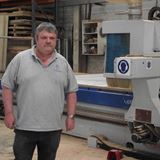 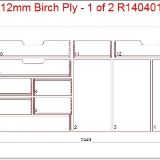 “Without CABINET VISION we might as well be using a hatchet.” Those are the words of Fitzgerald Kitchens Managing Director Eamonn Fitzgerald, who invested in the specialist woodwork CAD/CAM software in 2015, and says it was only when he started using it that he realized how indispensable it really is.


“CABINET VISION has been vital in increasing our piece part activity, which is the only way to increase margins, as the jobs we’re getting are being cut to the bone all the time.”

Initially installing CABINET VISION Solid Essential, the company – based in County Wicklow, in the Irish Republic – quickly upgraded to Solid Ultimate, along with the Screen-To-Machine Ultimate module for sending accurate NC code to their two Homag Weeke nesting machine tools; a DHP 210 with 9 x 7 bed, and BHP 200 with 9 x 5 bed.

He says CABINET VISION has been instrumental in expanding their trade operation, particularly repeat business from housing developers. For example, a recent four week 500,000-Euro job for a developer in Limerick, saw €145,000 worth of furniture leaving the factory each week, with only two fully-qualified cabinet makers and eight semi-skilled workers involved with the manufacture.

“A couple of years ago we were barely turning over 500,000-Euro a year. Now, in the first six months of 2016, the business-to-business side of the company turned over almost 2m-Euro.”

He says the fact that CABINET VISION does what skilled workers used to, is not simply a question of them setting out to save money. “Skilled people just aren’t out there anymore. A lot of them went abroad during the difficult economic times of a few years ago, and haven’t returned to Ireland.”

The company incorporated a number of the different construction methods they use, into a drop-down menu in CABINET VISION. These include Briarconnect, face frame, groove back, inframe, onefix, robes, standard, and standard dowel. And for manufacturing four different styles of kitchen – Painted, In-Frames, Contemporary and Shaker – they use four different production processes with different hardware.

“We just scroll down to whichever dialog we want and open it to edit the cabinet. Because of CABINET VISION’s parametric capabilities, everything changes in proportion, ensuring we get a perfect assembly that will fit together on site, and it means we can change things like going from a cheaper hinge to a dearer hinge, immediately, at the click of a button.”

Producing something ‘off-standard’ was difficult in their pre-CABINET VISION days. “If we were using the beam saw to make a number of kitchens with units of 720 mm high by 300 deep, they would then go on to point-to-point for standard drilling for shelf holes and locations for the hinges...after which, the fabricator assembled the units. If someone wanted units of a different size it was very time consuming.

“But using CABINET VISION, if a unit needs to be a metre high, instead of 720 or 900 mm we can do it by simply editing an existing cabinet in our library.” Working mainly with 2.8 x 2.1 metre boards of MDF and chipboard a typical nest comprizes between 15 and 20 panels. “It’s absolutely vital that every component is cut to an accurate, perfect shape with all holes in the right place.”

Which was something the beam saw could not always produce, as he says the components would often move off-square. “We had to create a program on the point-to-point so it would go round the parts and square them.”

He says there is no doubt that CABINET VISION has transformed the company in the short time they have been using it. “The nesters run on the early shift from 6 a.m., driving both machines, and do the same for the late shift from 12 noon to 8 pm. All programs are generated in CABINET VISION, cutting everything we make, ensuring we can ship around 40 completed kitchens and 250 bedrooms each month.”

Eamonn Fitzgerald, who runs the company with his brother, Des, designs his initial cabinet drawings, then transfers them into CABINET VISION for editing and manipulation to ensure that the NC code enables the machines to cut exactly what the customer requires.

“This is vital for cases where the back of a unit has to be cut to fit around a pillar, or to create a wine rack in the unit. Also, a lot of developers need oven and microwave configurations, which need to be customized. That’s all done in CABINET VISION, and is cut in the workshop instead of the fitter having to cut it to fit, when it gets on site.” And he says whenever a design is completed it is stored in CABINET VISION for use as a possible starting point when a customer wants something similar.

Overall, the combination of CABINET VISION’s ability to quickly produce accurate components and then nest them, with the Screen-To-Machine module generating NC code for perfect cutting, means that in addition to their standard turnaround time of six to eight weeks, they can always meet some housing developers’ demands for getting the units to site within a fortnight.

“CABINET VISION has been vital in increasing our piece part activity, which is the only way to increase margins, as the jobs we’re getting are being cut to the bone all the time. To get a profitable margin we have to make our furniture faster, cheaper and better, while ensuring high quality.”

“Without CABINET VISION we might as well be using a hatchet.”