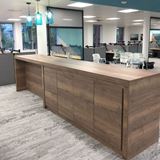 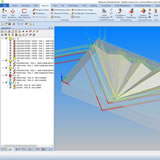 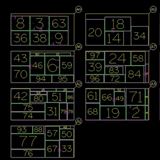 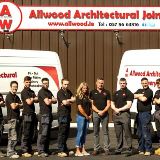 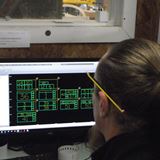 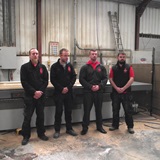 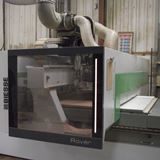 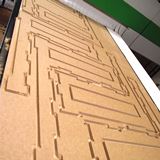 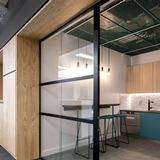 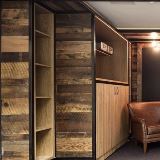 ALPHACAM Slashes Allwood Architectural Joinery’s Manufacturing Process for CNC, From a Day to an Hour

“ALPHACAM is one of our energisers – it’s definitely helped us get where we are today.”

Those are the words of Gerard Magee, Director of family-run Allwood Architectural Joinery, which celebrated its 21st anniversary last year. Based at Ballymacken, Portlaoize, in the Irish Republic, the company originally focused on hotel and bar fit-outs, but diversified when the recession hit.

“It’s helped us grow and control our processes to produce parts, including complex components, much quicker, and expand our services to the commercial sector.”

He says their 5-axis Maka PE 70 pod and rail machine programmed with ALPHACAM helped them to stand out in the recession, by providing the ability to produce complex components.

“It showed our capacity to do something different for clients, which was instrumental in getting us through the recession.”  One of those clients was Newbridge Silverware, and the ‘something different’ for them was an art deco cornice, based on a 1950’s ladies’ fan. “They loved that piece, and we did several shop fit-outs for them throughout the recession. I firmly believe that without ALPHACAM driving our 5-axis machine the company would not have survived at that time.”

And Production Manager Connor Magee explains how ALPHACAM continued to make a huge difference to them as the effects of the recession subsided. “It’s helped us grow and control our processes to produce parts, including complex components, much quicker, and expand our services to the commercial sector.” Nowadays their customer base includes a number of big-name clients, having completed three fit-outs for Google, along with Twitter’s Dublin operation, and Zendesk.

As well as the Maka 5-axis machine, ALPHACAM also drives a 3-axis Biesse Rover 10x5 nester. Workshop Manager Eoin Byrne says: “While we’d always used ALPHACAM Ultimate Router with the Maka, when we got the Biesse and started nesting, we quickly realized we needed the post to include that machine, too, to speed up the programming process.

“That, in turn, has speeded up our overall production time, meaning we can turn jobs around much faster.”

He says Automation Manager has taken a “crazy” amount of time out of programming, and the company could never go back to manual programming and remain competitive; a point echoed by Connor Magee: “Previously, we’d spend a minimum of six minutes optimizing a single sheet. But with ALPHACAM we can have 30 sheets with up to 200 nested components, complete with labels and reports, at the machine in ten minutes. It takes the manual part out of the process by importing CAD drawings automatically, inputting directly to the machine.

“We design our products in Sketchup, as many of the architects we work with like its final 3D visual. Once the drawings are approved we simply click a button to explode it, and the DXF files go down to the shop floor, run through ALPHACAM’s Automation Manager, and the individual components are nested.”

He says Automation Manager has revolutionized their production process. Previously, while a cutlist add-on to their Sketchup software nested the sheets, it all had to be done manually, and the machining was also applied manually. “Breaking down a typical kitchen ready for the CNC machine tool used to take us a full day. But with ALPHACAM’s Automation Manager that’s down to an hour – in some cases just half an hour.”

He says the process is quick and simple. “We break down our Sketchup drawing into separate files, and all components are nested in the sheet materials that we’ve listed.” Rules are set up for drilling, so all the tools and styles are applied automatically and everything is sent out to the machine with layouts. They also use ALPHACAM’s labelling system, so the machine operator only has to pull up the sheet, and when the parts come off they’re labeled and stacked on the trolley for forwarding to assembly.

“It means everything’s tracked and organized on the system.”

Concluding, Connor Magee says it is important to keep up with each of ALPHACAM’s twice yearly releases. “Every update contains new or enhanced functionality that speeds up our process, making it easier and better. ALPHACAM is a huge part of our company now and is absolutely integral to the manufacturing process with our two CNC machine tools.

“Every update contains new or enhanced functionality that speeds up our process, making it easier and better.”