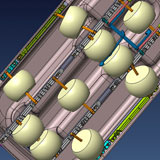 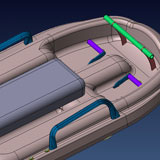 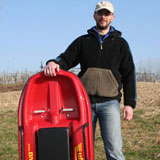 Half a plastic dustbin, a set of wheels and a cushion were the rudimentary beginnings of a project that now claims an international patent.

When the young lady who sped downhill on the grassy slopes of the Aosta valley in her converted dustbin met, some years later, Marco Naretto of Model Project they came up with the idea of a bob-sleigh for grass that could be used in the summer months by major ski resorts.

"Keeping all the data in one system eliminated the possibility of data loss guaranteeing a rapid time to market."

Model Project, based in Scarmagno, Italy, developed the first prototypes using VISI Design and VISI Modelling. The bob-sleigh – now in production – has a robust plastic body, polyethylene wheels and a galvanized iron security brake. The security brake ensures that the bob-sleigh stops immediately if the driver falls off the bob-sleigh.

“The design of the brake” explains Marco Naretto “ was studied using VISI Modelling and we also relied on VISI for the design configuration of the wheels”. To guide the bob downhill, the driver shifts their weight over a central bank of wheels which follow the profile of an arc and allows the bob to curve (carving effect).

Model Project particularly appreciated the possibilities offered by VISI for designing in free mode for conceptual and parametric design and detailing. The advanced automatic dimensioning capabilities were particularly useful for the creation of the two-seater version of the bob-sleigh.

VISI Machining was used to create the machine toolpaths. "The importance of keeping all the data within one system eliminated the possibility of data loss guaranteeing a rapid time to market for the one and two-seater bob-sleigh" claims Naretto. Giu dyn and Maxi Giu dyn will soon be seen on the slopes of the major ski resorts in Italy, France and other parts of the world.

Model Project is a service company specializing – since 1972 – in the creation of demonstration models for major companies in the electronic, biomedical, automobile and telephone industries.

Their three FDM machines allow the creation of completely functional prototypes for designers to immediately verify the geometry and functionality of their products.

Model Project chose the VISI software suite for its capability and simplicity of use 15 years ago and still today appreciates the powerful, practical and innovative solutions offered by the Vero team.

Vero Software Plc is represented in over 40 countries by more than 80 distributors and, in addition to its extensive dealer network, has its own direct sales operations in the UK, France, Italy, USA, Japan, China and Canada.

"Keeping all the data in one system eliminated the possibility of data loss guaranteeing a rapid time to market."