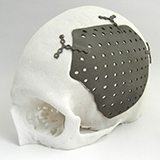 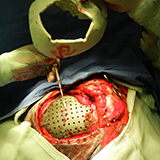 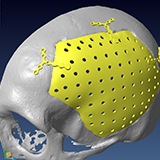 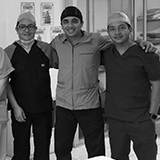 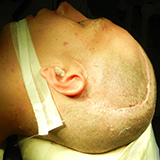 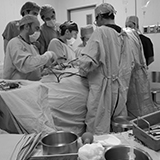 Doctors and engineers in the small Mexican state of Querétaro used VISI software to design a 3D printed titanium cranial prosthesis, for a patient who had been shot in the head.
The wound destroyed the left portion of his skull, but after a year of rehabilitation he was selected to receive the revolutionary prosthesis implant, created using the “Titanium particles additive process,” which is an innovative method of manufacturing traditionally used with aerospace components.

“We worked closely with the medical team to perfect the design. The holes and fixing structures all serve a purpose. It was important that the design would interact naturally with the human body, allowing fusion of bone tissue and fluid flow within the cranial cavity.”

For the cranial implant, surgical grade titanium powder particles were used, bound at a molecular level by a high intensity laser, generating a compact, robust and biocompatible structure. The 3D printing was carried out on an EOSINT M280 DMLS (Direct Metal Laser Sintering) machine valued at around US-$1.5m. Printing directly from the CAD data, the machine is equipped with a 200 W or 400 W fibre laser which melts fine metal powder and builds up the product layer by layer. This method produces extremely complex geometries that could not be manufactured using traditional methods.
The prosthesis was designed using the VISI CAD/CAM suite from Vero Software, and undertaken free of charge by designers and engineers from Vero’s Mexican reseller, VISI Series México. The team comprised Raúl Moreno, Salvador Enriquez and Elĺas Hernández.

From there, a network of curves was taken from the good side on the skull and mirrored onto the left side to cover the aperture. Then a surface model of the prosthesis was created and the doctors were again consulted to help determine the ideal fixing structure and screw locations and to ensure that the model conformed to the needs and complexities of cranial anatomy. At this point, a plastic prosthesis was printed for assembly to the head prototype to check for alignment and fitting. With a design finalised, the prosthesis was sent to the USA for printing on the EOSINT M280 DMLS machine. The US-$8,000 printing costs were met by a private company in Querétaro, with the support of the BHA Foundation.

Project Director Dr Gilberto Lopez – a specialist in oral and craniofacial rehabilitation – worked with experts in neurosurgery and maxillofacial surgery, regarding the cranial implant design, and successfully prepared the surgical titanium prosthesis model.

Commenting on the prosthesis design, Elĺas Hernández says “We worked closely with the medical team to perfect the design. The holes and fixing structures all serve a purpose. It was important that the design would interact naturally with the human body, allowing fusion of bone tissue and fluid flow within the cranial cavity. Because the prosthesis is metal, it must also allow for low heat dissipation around the brain."

Lasting four hours, the surgical procedure was carried out at a public hospital in the Mexican city of San Luis Potosi, by a team of neurosurgeons, maxillofacial surgery and oral rehabilitation specialists, who also worked free of charge.

Raúl Moreno, Director General at VISI Series México says: “A number of countries, including England, the United States, China and Spain, are already starting to use this type of technology for patients with congenital or acquired craniofacial deformities.

“The process gives the ability to design and manufacture custom prostheses quickly and safely, which are both functional and aesthetical, considerably improving the patient’s quality of life. And Mexico is now finding a position amongst the pioneers of custom titanium prostheses. The fact that a group of technicians and physicians can selflessly contribute in this way to benefit our society is a great source of pride.”