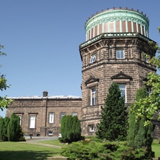 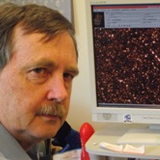 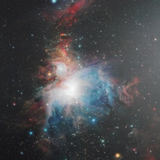 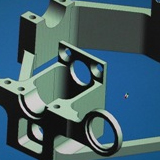 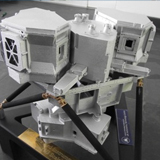 Coldest Place in the Solar System for EDGECAM Components

Telescope components created through EDGECAM and manufactured on a 2.5-axis Bridgeport Interact milling machine have to perform in the coldest place in the Solar System.

The UK Astronomy Technology Center, based in the Royal Observatory on a hill overlooking Edinburgh, builds scientific instruments for the world’s biggest and most powerful telescopes, for use both on the ground and in space.

As a world leader in their field, astronomer Dr John Davies (pictured left) says the UKATC specializes in equipment that has to be operated at extremely low temperatures. “A lot of our instruments work in the infra-red section of the spectrum, and in order to operate effectively they have to be supercooled, often below minus 200˚ Celsius.”

And one instrument assembled from numerous components manufactured through EDGECAM Computer Aided Manufacturing software, has to operate at even lower temperatures. The core of a new generation wide-field sub-millimetre camera known as SCUBA-2, for the James Clerk Maxwell telescope on a 14,000 foot mountain in Hawaii, has to work at a fraction of a degree above Absolute Zero (defined as 0˚ on the Kelvin scale, minus 273.15˚ Celsius, and minus 459.67˚ Fahrenheit).

UKATC ’s components have to be manufactured to very high tolerances to ensure they will work constantly in such out-of-this-world conditions. “A lot of care has to go into precision machining and precision assembly, to account for the levels of contraction and expansion. Some of the instruments are 2 – 3 cubic metres in size, which is a lot of metal that has to be slowly cooled down for operation, and then slowly warmed up again. As these are essentially optical instruments which bounce light inside from mirrors and gratings, everything has to contract in a controlled way so that everything is still lined up to micron-type precision when they’re cold.”

A completed assembly comprizes a number of parts, ranging from just two or three, right up to 100 or more. Instrument technician George Davidson (pictured right)  says EDGECAM gives them the reliability of manufacturing high quality components every time on their Bridgeport 2.5-axis and Haas 5-axis milling machines. “It’s vital to our manufacturing process. We’d be lost without it; it’s the be all and end all for producing CNC codes for our machines, which on average are in action for 4 days out of 20.”

For the Bridgeport, the EDGECAM features they find most useful include pocketing, roughing cycles, profiling cycles and hole cycles. Autodesk Inventor files are easily imported into EDGECAM, where George Davidson and his team set the datum positions, apply the tools and generate the CNC code. “It really is that simple, and the time for programming a part can be as little as 10 minutes. I’ve never had an issue with EDGECAM not producing absolutely reliable, accurate cnc code.”

The team of three technicians are also impressed with EDGECAM’s automatic notification when any existing parts have been altered. “If a part is up-issued by the design office we can see instantly what has changed – it might be a hole position, or the overall size of the part might have changed. It’s then very easy to make the required modifications.”

Much of the work they have done so far on their recently-acquired Haas has been 3-axis where they have moved from standard datum indexing  to an angular datum through using the trunion. A post processor is in place to use - for 5-axis machining, and George Davidson has undertaken a 5-axis training course at EDGECAM’s training center in Wakefield. “I’ve now got a few parts waiting for my attention for 5-axis milling, so we will be making a start on that in the near future.

EDGECAM seamlessly integrates 4- and 5-axis simultaneous machining strategies, enabling a range of multi axis cutting strategies to be applied to even the most complex of parts. UKATC will experience reduced cycle times when machining complex components using the Haas 5 axis machine. In addition, the potential for positioning errors between setups will be reduced.

They will also gain improved surface finish and extended tool life due to the tool tilting to maintain optimum tool-to-part contact point at all times. And there will be improved access to undercuts and deep pockets through tilting the tool or component, which allows shorter series tooling. This will improve the surface finish even more and do away with the need for secondary setups.

While UKATC will increase its use of EDGECAM’s range of features for the Haas, one in particular they will run every time for 5-axis milling, is the collision detection. “This is totally necessary for our peace of mind.”

As well as SCUBA-2, the UK Astronomy Technology Center has also used EDGECAM to build elements of an instrument known as MIRI (scale model pictured left) , for the James Webb Space Telescope, which will be the largest and most sensitive infrared space telescope ever launched. Other parts created using EDGECAM are also contained in the SPIRE instrument (pictured below with Dr John Davies) on board the European Herschel Space Observatory, along with components for ground-based telescopes such as VISTA, the Very Large Telescope in Chile, and the UK Infrared Telescope in Hawaii.

UK Astronomy is currently liaizing with the medical profession about the possibility of its technology for improving optical images coming from space, to be used to correct eye problems such as glaucoma and cataracts. So EDGECAM’s outer space components could be used in inner space, too, in the future.