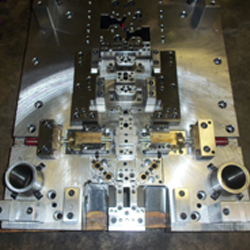 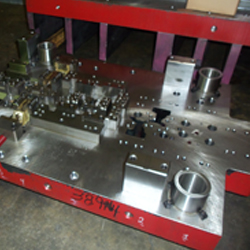 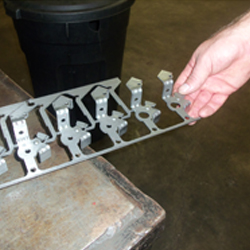 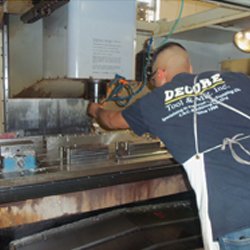 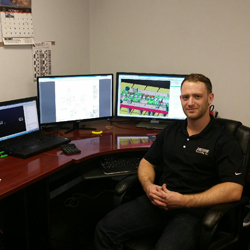 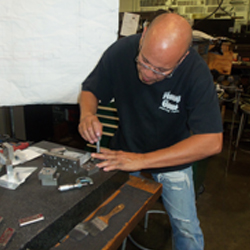 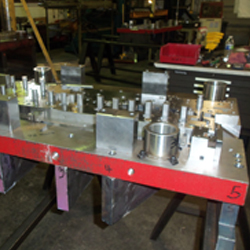 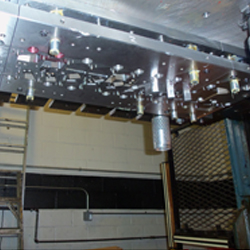 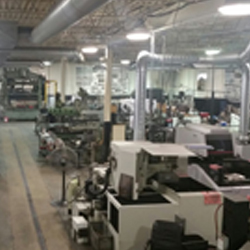 Scott DeCore was the company’s sole employee in 1996, when he founded the business as a lone entrepreneur.  The nearly 20 intervening years have proved successful for the company, which now boasts a staff of 20 — including Secretary and Treasurer Carol DeCore, Scott’s wife.

The couple’s son, Bobby DeCore, works as a design engineer for the company, at which he got his first taste of manufacturing by operating its CNC machines as a high school student. He later attended vocational school for tool and die manufacturing, and earned an associate’s degree in the discipline.

“VISI has a lot of functions that are created directly for the die world. It also has a lot of automatic functions, so I almost never have to lift a calculator.”

“I wanted to do something with engineering,” says DeCore, 24. “I like to design and draw.”

DeCore’s sights were set on a career as a professional boxer until a concussion permanently sidelined his dream. Today, he approaches his design work with the same logical strategy that served him in the ring. “Boxing is peaceful, like a game of chess,” he says. “It’s not about fighting, but about making the right moves.”

Design work at DeCore Tool & Manufacturing — which entails logic, imagination and a gift for reverse engineering — is also about making the right moves.

While the company primarily serves repeat customers and manufactures metal stamping dies for the automotive industry, it also performs one-off jobs and serves a wide range of other sectors.

From dies used to make appliances and electrical parts to those used in the manufacturing of eternally popular Weber® grills, there is no end to the variety of design jobs that make their way across DeCore’s desk.

“We wanted to get into the 3D world and, being a job shop, you have to be efficient in a 3D software,” DeCore says. “I started using VISI with no design experience, but it was very easy for me to learn to manipulate and use solids. It’s easy for me to take a part, make a strip, and design a tool around it.”

While each job varies, DeCore typically begins a job in VISI by importing a solid model of the final part to be produced with the die. It’s his job, with help from VISI, to deconstruct the part and create a working model of the strip that will in turn create the final product.

“I have never had any problems importing into VISI. Nothing gets deformed or has multiple surfaces, or any loss of integrity,” DeCore says. “If it’s not a complete solid — if there is missing information — VISI has the tools to correct the bad geometry.”

Because VISI is equipped with an extensive range of translators, designers and programmers are able to work with data from virtually any CAD source — which makes it easy to accurately manage information from a wide range of customers. VISI rejects corrupted geometry during the process of importing CAD data, which means that DeCore is able to begin the job with the best possible information.

“On other software, you don’t have as much freedom. There are no constraints on any solids in VISI,” DeCore says. “Every solid is able to be manipulated so you can alter imported geometry.”

Once the data is imported, DeCore determines where the entry point will be made on the die. “Once you get all your stations unfolded, you can bring it into VISI’s strip study and build your components around your strip,” he says.

Unfolding capabilities in VISI are formulated to allow the designer to plan each forming stage by dynamically adjusting bend angles. The solution also allows the designer to incorporate parametric features — for instance, ribs and bosses — that can be utilized or deactivated throughout the forming process. With flexible editing, stations can be easily added or removed.

“I start with the last station and work backward, deconstructing the part and breaking it down,” DeCore says. “Your strip is basically your plan of how you’re going to make your tool out of a piece of steel.”

VISI enables DeCore to easily generate a 3D strip layout, on which he is able to use VISI’s automatic blank alignment, rotation, and optimization functions to create the most efficient strip possible. The software also includes an automatic 2D strip plan option, which assists in punch design and includes fold lines.

“VISI has a lot of functions that are created directly for the die world,” DeCore says. “It also has a lot of automatic functions, so I almost never have to lift a calculator.”

Among VISI’s capabilities is a range of automatic and semi-automatic functions that assist with the creation of shearing punches. Once those punches are created, they can be moved to different locations in the strip with simple drag-and-drop placement, at the click of the mouse.

The flexibility of the process has made designing challenging progressive dies a simpler process for DeCore.

“If one option doesn’t work, there’s always another option. It isn’t software that makes me ask, ‘Does it do this?’” he says. “It’s more, ‘How do I want to do this?’ The interface is completely customizable, and most functions have multiple options for getting you where you need to go.”

DeCore also credits the collision detection capabilities of VISI for helping him create error-free designs that are press ready. While the company does test its dies in-house, all production of final parts takes place after the finished product is delivered to the customer.

“Being able to see the 3D model and check interferences helps save time in the press,” he says. “There are a lot fewer errors because you can see if anything’s going to hit.”

He also values the solution’s ability to switch from 3D to 2D without sacrificing data integrity. “In VISI, it’s very easy to go from 3D to 2D. This is important because you can’t print a 3D solid to show to customers.”

Michigan-based Tooling Software Technology (TST), LLC, VISI’s master distributor in the United States and Canada, has also played a part in DeCore’s success. TST provides educational services to DeCore, and continues to support efforts to maximize the capabilities of the software.

“TST has provided me with great education of VISI,” DeCore says. “The support staff has a lot of combined die and modeling knowledge, which is nice because I know when I call for help they can always give me a solution. Everyone I have met from the TST staff, ranging from the secretaries to sales staff to support, have all been very nice, knowledgeable, and showed the willingness to help in everyway possible.”

Perhaps most importantly for DeCore, VISI has enabled him to quickly become a productive team member at the company.

“I’ve had help from our other designer, but even with a small amount of experience I’ve been able to complete complicated 3D designs,” he says. “After one week of school at TST, I was able to design a full die. I have help from TST support when I need it, but I have to give VISI a lot of credit for what it can do. I don’t have to have 50 years on the job to be able to do this.”

“VISI has a lot of functions that are created directly for the die world. It also has a lot of automatic functions, so I almost never have to lift a calculator.”