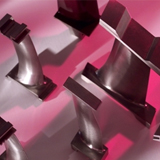 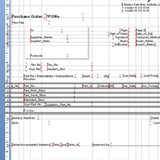 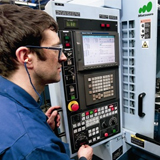 It came as a nice surprize when Leicestershire-based JJ Churchill were named Rolls Royce Aerospace Global Supplier Of The Year, and managing director Andrew Churchill says having  Jobshop as their ERP/MRP system went a long way towards securing the award.

Founded on Christmas Day in 1937, JJ Churchill originally produced parts for the Merlin engine for the Spitfire, Hurricane and B-51 fighter aircraft. They then got involved with Sir Frank Whittle working on the development of the jet engine, and produced some of the world’s first compressor blades. Since 1947 compressor blade manufacture has been a core element of their business.

Other areas include defence work for BAE Systems, and a lot of high horsepower diesel engine work, which is lower volume but higher part count. The parts are physically large and technically complex, usually made from casting, both SGI and aluminum.

But it is their manufacture from forging or from bar, which led to them winning the prestigious Rolls Royce award.

“Rolls Royce are a very demanding customer,” says Andrew Churchill, “which is totally justifiable when you look at the products they produce, that carry millions of people through the skies, and which our Air Force and other Air Forces rely upon.

“From a supply chain perspective it’s historically been 100% in full on time, along with 100% quality at the right cost that have been taken into consideration. But with Rolls Royce those are the absolute baseline requirements. They look much broader than simply cost, quality and delivery, and want evidence of delivery technology management. We won the award because of the breadth and depth of our strategic planning and management competence – they were impressed that although the components we manufacture for them had stayed the same, the way we produce them evolved and changed. This is where Jobshop comes in, right across the board.”

Jobshop, which is a market leading product from Planit Software Ltd, provides the management of all their information within the business.  Right from the initial inquiry, through MRP and sales order management, Jobshop marshals and co-ordinates what they produce, how they produce it, from whom they order, and to whom they deliver.

Logistics manager Mark Atkinson says the process begins with the quotations. “We set the parameters and costs in Jobshop and then do variables on those base elements to give different scenarios for customer quotations. And we’ve had success in winning business as a result.” He says they input all the schedules into Jobshop, whether manual or through Electronic Data Interchange. “More customers want to use EDI nowadays, and Jobshop is easily able to handle that.”

He says they then run MRP to suggest what to make, when, what to purchase, from whom, in what quantities and what the lead times are. From that, they move into scheduling, which is their capacity planning tool used by their manufacturing manager and production controllers. In addition they have batch cards, which run through the shop floor. They use shop floor data collection to collate all that information to run a real time system, so they know exactly where they are, including costings,  with all projects at a given time, “It enables us to give good quality information to our customers, as well as helping us remain entirely in compliance with the clearly defined and tightly controlled processes that our customers in aerospace and defence expect and require.”

There is a special relationship between JJ Churchill and Jobshop, as Jobshop’s original product was developed around Churchill’s requirements at that time for a control and manufacturing database.

Andrew Churchill says that as a database, Jobshop has remained the core of their business for information. “Our business would be fundamentally constrained in its ability to grow if we didn’t have a fully functioning database approach to the way we manage information. As an SME within the supply chain we tend not to be mass producers, but have mass customization and a huge variety of part numbers. There is simply no way we could manage that part count without Jobshop. And even if we could, it would be impossible to be compliant with the processes and standards required by our customers and the industry. So having Jobshop’s systematic database approach to handling that information is a basic prerequisite for our success.”

Another distinct advantage of Jobshop is that it is fully scalable, and is capable of coping with a far bigger business than they currently have. Mark Atkinson says they are aiming for a turnover of around £15m this year, and Jobshop will be able to control that easily.

Jobshop is also a key element in Churchill’s SC21 program. Andrew Churchill says SC21 originated from BAE Systems’ supplier and manufacturing excellence programs, which, in turn, came from Kawasaki. “We’ve been supplying BAE Systems for many years, so stepping up to SC21 has been more of a translation for us than anything else, making sure we’re talking the right language and that we’re presenting our continuous improvement plan appropriately. Jobshop is an important element in that, both for us, and for any company seeking SC21 compliance.”

It also helps cut down on financial duplication by linking directly into Churchill’s Exchequer financial package. Mark Atkinson says it gives them faster transactions and a true cost picture right across the board, which is a great benefit.

Engineering manager Jason Neville says they have 2-, 3- and 4-axis Mazak, Matsuura and Doosan machines. “EDGECAM is important for manufacturing the castings as it gives us a visual representation, and quickly generates the CNC codes. We also use it for producing aluminum and steel prismatic parts from solid bar or plate.”

Like their long relationship with Jobshop, Churchills have also been using EDGECAM and its predecessor for many years.