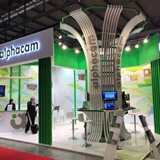 The Xylexpo trade fair proved to be the perfect showcase for ALPHACAM’s Italian reseller to demonstrate the software’s powerful automation functions.

Held at FieraMilano-Rho, the 2018 international biennial exhibition of technology and systems for the wood and furniture industry, focused on automation. Marco Silva, from ALPHACAM reseller Licom Systems s.r.l. Italy, says visitors to their booth were particularly impressed with ALPHACAM’s automation features.

For example, there is now the ability in Automation Manager to have a connection between ‘parent-child’ parts, as job files can be added to another job file as a sub-component. This enhances the management of parts that should be manufactured in groups. The sub-components have similar properties to the main components, such as layer mapping, along with material and nesting properties.

Also in Automation Manager, drawings and fittings can now be added to specified datum points. When processing a job the fittings will automatically be inserted at a pre-defined position, and can also be used in parametric drawings.

“Visitors were also impressed with ALPHACAM’s important nesting feature, allowing the nesting engine to automatically use the best available user-selected sheets. Previously, the sheets would be used in the order picked, and therefore, the nest wasn’t always optimized for best sheet usage,” explains Marco Silva. “But now, users can select multiple sheets, and the nesting function automatically picks the best combination, which can significantly reduce material usage.

“ALPHACAM is now considered to be a ‘problem solver’ application for medium and large woodworking companies throughout Italy.

He says around 30 strong new leads were generated on the booth, and Licom Systems also opened dialogue with a number of OEM machine manufacturers, including Felder, SCM and Biesse.