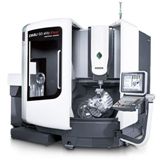 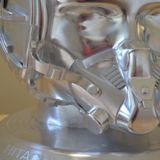 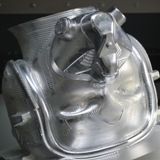 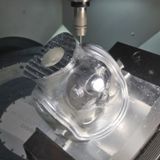 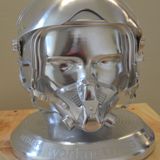 WORKNC partnered with DMG Mori Seiki and Hitachi Tool to produce an intricate lifesize model of a pilot’s head and helmet for displaying on their booth at the Le Bourget International Paris Air Show in June.

The bust was machined from 10 aluminum blocks using WORKNC’s diverse 2D 3-axis, 3+2-axis and 5-axis toolpaths, all programmed with the latest release, Version 24.

Thanks to the new Transformation functionality, toolpaths only had to be created for half the helmet. Symmetrical toolpaths were then reproduced with a single mouse click, eliminating additional calculation time, meaning the Mori Seiki DMU 60 eVo linear machine could start cutting metal considerably sooner.

DMG Milling Product Manager Denis Vernier says: “And there was never any danger of a costly collision, as WORKNC’s collision detection function includes the machining environment, tool holder, stock, and the machine itself."

“Adjustments were not required to the post processor – the initial program was operational immediately, and whether it was a question of 5-axis positioned or 5-axis simultaneous strategies, the different machining phases succeeded each other seamlessly.”

“The combination of CNC and cutting tools was perfect to machine the new reroughing toolpath which generated optimized, smooth trajectories, giving improved surface quality in all the reroughing zones – both vertical and planar. No polishing operations were needed after machining.”

The helmet also benefitted from the Machining Context function, which grouped together all the different elements relative to the machine configuration. Denis Vernier says: “This was essential for such diverse WORKNC functionality as collision detection and automatic linking of 5-axis assembled toolpaths, which allowed us to set up all clamping systems and other fixtures to work safely, and within the limits of the machine tool.”

Because the part was so complex, there were numerous rest material zones, especially around the visor and padding zone where the helmet links to the pilot’s head. It meant WORKNC’s new Rest Material Display complete analysis tool was used extensively in preparing toolpaths, by quickly identifying the zones. “This provided important time savings, especially for roughing routines, in order to minimize the zones before the finishing phase.”

With 100 hours of CAD preparation, 120 hours of CAM programming, and 170 hours of machining time, Jean Philipp Rey says the WORKNC, the Hitachi cutting tools and the DMU 60 eVo “exceled beyond all expectation” with rapid and automatic programming, safe and reliable toolpaths, and high performance machining, to produce the helmet for exhibiting at the prestigious air show.