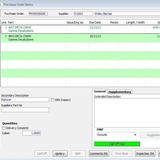 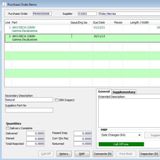 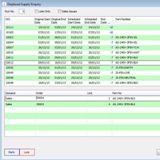 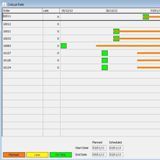 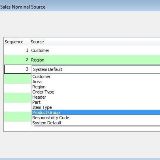 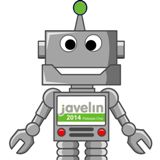 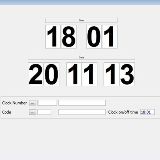 The latest release of JAVELIN production control software automates a number of mundane activities, allowing manufacturers to focus on the important information the system provides for running production.
JAVELIN consultant Ian Cartwright says: “We’ve taken away some of the more mundane manual tasks, such as entering certain types of data and replacing it with default data that manufacturers can customize. This frees them up to concentrate on actually running their business.”
Amongst the functionality which can now be automated:
Time and Attendance – instead of employees using a keyboard and mouse to select whether they are clocking in our out, they now scan their ID badge at a single screen to toggle in/out.
Call Off Purchase Order – creates a “call off” purchase order against a contract’s agreed period or price. “It means that when there’s a specific requirement to take delivery of any of those items MRP can call them off the existing order rather than raising a new order each time,” says Ian Cartwright.
Nominal Code Source – defines a hierarchy of defaults and validation rules for nominal, cost center and department codes.  Previously, when working with an accounts interface, the nominal accounts code was restricted to the part or product group, and any other parameter needed manual entry. In 2014r1 the code can now be based on many parameters such as the customer or supplier, the area or region where the customer is based, or from the type of sales or purchase order being raized.
JobView Windows Document – the Windows default application now opens attached files without setting up individual viewers. Windows chooses the viewer automatically, based on the file association.
Scrap Management – the “do not assume over-production is scrap” customization can now be set on a part-by-part basis. “With some parts the user may want to be cautious, but if they over-produce with others, the extra supply can be netted against other demand.
Purchase Order Review – the PO review has traditionally displayed all orders due by a certain date. This function can now be customized on a customer by customer basis.
Request For Quotation – many enhancements, including color coding, have made the status of RFQs clearer, along with the ability to raize RFQs within the MRP system. “When MRP identifies a need to purchase something, it can be converted to an RFQ and sent to several suppliers to get the best quote. Confirmation of the responses will raize the actual PO, just like confirming the original MRP suggestion.”
Part Defaults – changing the item type now only changes defaults that have a value. Previously, when changing the item type on a part, the system changed all defaults.  In JAVELIN 2014r1, if there is no setting defined for a particular default, changing the item type will no longer modify what is already on the part.
“This latest release isn’t all about automating the mundane, though. There are also a number of enhancements to improve flexibility and functionality,” says Ian Cartwright.
Batch Sensitive Lead Times – works orders lead times can now be calculated using actual cycle times for the batch quantity coupled with an additional fixed element, via lead time groups, which can be varied manually to cover production bottlenecks.  “There’s no such thing as a normal batch quantity nowadays. One day you might be making a one-off, and the next day manufacturing 100 or more parts. So the new batch sensitive lead times can now be calculated on the end-to-end cycle time for that particular batch size.”
Finally, ISSUE DEFINITION is now separated from the actual part issue, allowing reversion to previous issues. “Users can now create a second issue without replacing the first, and add Bill Of Materials, routings and estimates to it. Then, when they’re ready to actually move forward, the second issue can be officially applied.”
Much of the new and enhanced functionality has been created at the specific request of customers, including the Nominal Source Code, RFQ and Call Off Purchase Orders.
JAVELIN also has a new web address: www.javelin-mrp.com.