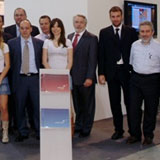 “If you have a CNC machine to run or axis to move, ALPHACAM is the solution.” That is the personal maxim of Marco Silva, General Manager of Italian software vendor Licom Systems s.r.l., which celebrates its 20th anniversary in April.

As well as providing the ALPHACAM CAM system to the Italian metalworking, woodworking, stone and plastics processing industries, Licom also works closely with end-users on support services, training, bespoke applications and post processors. Marco Silva says they choose to specialize fully in ALPHACAM.  “To be successful in this competitive market we realized we must be a ‘super specialist’ and not waste resources in something not related to our main business.”

With two offices – in Turin and the outskirts of Venice – and a representative near Naples, Licom works with OEMs such as the SCM Group and Biesse, and large international firms including aerospace company Alenia, Anglo-Italian helicopter manufacturer AgustaWestland, and Italy’s largest power company Enel.

“And a big success for us, is the thousands of medium and small companies that form the Italian economic base,” he says. These include metalworkers with mills and lathes, and a growing market amongst aluminum cutting firms. A large slice of their turnover also comes from wood industry OEMs and every type of industrial woodworking from furniture to doors, sign-makers, craftsmen and joinery.

ALPHACAM is used in two applications for the Italian plastics market – panel cutting, and trimming for thermoformed products. “Trimming is especially important in the thermoform market, where ALPHACAM creates the paths for CNC machines trimming off the scraps and cutting holes,” explains Marco Silva. For this type of strategy the tool position is calculated normal to the face direction following a drive curve. Using ALPHACAM on 5-axis machines means emphasis is placed on tolerances more normally associated with injection molding.

Stone manufacturers use ALPHACAM for 3- and 5-axis machines and robots producing sinks, shower bases, stairs and other building constructions, along with religious images and bas-relief sculptures.

An additional string to Licom’s bow is working with other ALPHACAM resellers writing post processors and macros for Italian machine tools that are sold worldwide. They have also developed their own automatic production management system ‘Gestione Produzione Automatozzata’ (GPA). “This is an application we wrote in VB and .Net to use ALPHACAM as a full automatic processing system, reducing any potential bottlenecks from the order right through to production.”

Marco Silva says their wood and stone customers find it particularly useful. “With GPA they can read and machine solids automatically. GPA is programmed using a set of more than 100 macros to read dxf files, apply parametric geometries, read the parameters from the SQL database, carry out nesting if necessary, apply toolpaths and output NC files automatically.”

He says that while Italy is a mature CNC market, there are still major opportunities for growth, including orders from the OEMs using ALPHACAM who are exporting their machines worldwide, especially to the Middle East, the Emirates and North America.

“Also, many small to medium size companies realize they must invest in software and efficient production processes to survive in the current difficult economic climate, and ALPHACAM can be used to drive machines from all manufacturers.” It is proving especially popular for 5-axis machines and for companies wanting to automate as much of their manufacturing process as possible to cut costs and improve efficiency.

Licom is playing its part in helping the ALPHACAM R & D team’s ongoing enhancements to provide solutions that he says no other software can. “As we see users regularly, we readily understand their specific requirements and pass them on to the developers for inclusion in the twice-yearly updates.”

The company started life as Sycam in April 1992, later becoming a reseller for ALPHACAM’s forerunner, Licom. In 1995 they became a subsidiary, and decided to maintain the Licom name in Italy when the software rebranded as ALPHACAM.  Marco Silva runs the company with Giovanni Pichioldi, and they employ a total of 13 staff.