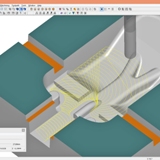 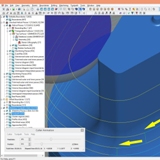 The powerful 3D CAM software contains a number of items of new and enhanced functionality, but Waveform Roughing is the most significant, giving faster material removal rates and longer tool life.

With demands for ever-shorter lead times and improved quality, the high speed machining (HSM) provided by MACHINING STRATEGIST is now commonplace in many mold, tool and die shops both in the CAD/CAM office and on the shop-floor, to machine hard materials with increased feed rates.

New and enhanced functionality will now be released every six months, with the Waveform Roughing strategy being a major update in MACHINING STRATEGIST 2016 R1.

Dean Kendall, MACHINING STRATEGIST Product Manager, says Waveform Roughing is superior to the traditional roughing cycle where machinable geometry features are offset, either inward or outward, by a stepover.  “Traditional tool paths have to run slower feeds and speeds due to the variable width of cut conditions encountered in corners.  Tool load spikes as chip thickness increases in areas where the tool finds more material than it did while cutting in a straight line.”

With Waveform the full flute length of the tool is utilized, consistently engaging with the material, giving a constant cutting load, and moving in a smooth path to avoid sharp changes in direction which maintains the machine tool’s velocity. The feed rate can remain at the optimal value throughout the cycle.

“Cutting along as much of the flute length as possible distributes wear evenly along the entire flute length rather than just the tip, massively reducing tool vibration. The radial cut depth is also reduced to ensure a consistent cutting force, allowing cut material to escape from the flutes. Tool life is further extended, as most of the heat is removed in the chip.”

Released on October 30, MACHINING STRATEGIST 2016 R1, which is fully supported against Windows 10, also includes an option to add an overlap to looped passes, helping to give a better quality finish as the entry and exit moves of individual passes are never coincident.

The stepdown management of Z Profile strategies has been improved to help eliminate a very small stepdown on the final Z level and thereby resulting in a shorter, more even toolpath.