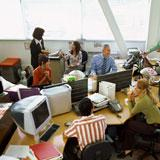 JAVELIN performs when the pressure is on

Getting the right product to the right place at the right time has always been a prerequisite for success in the manufacturing sector. So, for a company to not only survive, but flourish in the Just-in-Time, Kanban-driven environment of heavy construction equipment manufacturing means taking this ability to new heights. Original equipment supplier, Pressure Hoses of Eccles has met these challenges, and more, by streamlining its complete operations using Jobshop manufacturing software.

Pressure Hoses Ltd has come a long way since 1989, when it first started supplying hydraulic hose assemblies from premises in the Eccles area of Greater Manchester. During the past 15 years, the company’s hunger for success has been rewarded with long term contracts to supply some of the industry’s leading OEMs; including Komatsu, AGCO Massey Ferguson, JCB group and Moffett Engineering.

“In the early days, all our systems were manually based,” says company director, Pam Yates. “But as we grew - and production increased - we seemed to get more and more tied down with paper.”

“To understand the problem, some of the metrics of our business need to be appreciated,” she continues. “We supply a huge variety of hose assemblies, with customers specifying their own type of end fittings, as well as hose diameters and lengths. Batch sizes are invariably small. So, although 75% of our work can be regarded as ‘standards’, the volume of orders going through our production facility at any one time is enormous.”

By the mid nineties, the company had broken through the £1 million per year turnover barrier and relocated to its present, purpose-built 30,000 ft 2 site. Its workforce had also increased to more than 20 employees, of which four were devoted to running administrative systems.

In parallel, Pressure Hoses’ customers were growing more demanding too, with increasing adoption of mainstream automotive industry methods, including the introduction of Just-in-Time and Kanban operations. The emphasis was moving away from suppliers being asked: ‘can you deliver on time?’ to an environment where they were expected to provide added value, greater control, improved quality and increased traceability. However, this was very much in tune with Pressure Hoses’ own development strategy of targeting the larger and more successful companies in this sector.

Yates continues: “Ten years ago, the company’s operations were characterized by piles of photocopied works orders and scheduled sales orders that could easily take two and three days to enter onto our systems! And because this represented a significant proportion of the total time we had to complete the job, it was clear to us that we needed to automate our processes by implementing a high capability manufacturing system.”


After investigating a number of alternatives, the company concluded that Jobshop would provide the capabilities required to support the business, both in the short and longer term.

“We initially installed Jobshop to handle sales order processing, with the intention of rolling it out into the production areas with works orders and MRP at a later date,” says Yates.

Its implementation not only had an immediate and dramatic effect on the volume of paperwork being generated, but also significantly speeded Pressure Hoses’ ability to process customers’ weekly schedules. Indeed, its streamlining of operations has proved to be doubly important in the light of the introduction of EDI scheduling and Just-in-Time systems at several customer sites. As a result, the Jobshop system has subsequently grown in line with the company’s own success.

Yates confirms that one of the benefits of EDI operation is that while requirements are only fixed for the following two weeks, it does provide forward visibility of all major schedules up to six months in advance. With raw material lead times running at up to three months in some cases, this could be a major headache. However, Jobshop provides the degree of control needed to manage these sorts of problems extremely effectively.


The introduction of Kanban systems at customers such as JCB group has also placed further demands on the company.

“Because they hold zero stock, we need to deliver the precise quantity of parts to the right place at the right time for each day’s production. That means delivering components each day to the correct door at the JCB plant within a one hour time slot, so that they can be transferred to the appropriate line side feeder ready for immediate use,” explains Pressure Hoses’ MIS Manager, Jonathan Abbott. “We cannot over-deliver for tomorrow’s build, for example, as there is simply no facility to accommodate that on JCB’s systems. Accordingly, we’ve got to know exactly what we need to produce on a day-by-day basis; but this is easily achieved by running Jobshop’s MRP module every 24 hours.”

In parallel, Pressure Hoses has employees located permanently at JCB and two other customers’ plants in order to manage on-site operations. They have remote access to the company’s Jobshop system, giving up-to-the-moment information on the status of each individual consignment or batch.

“The move to EDI has also fostered a culture of trust between our customers and ourselves,” notes Yates. “It covers everything from schedules to delivery notes; and by effectively removing the safety net of making for stock, it has increased both our confidence in and reliance on our system.”

Pressure Hoses’ Jobshop implementation now permeates every aspect of the company’s activities; from costing and estimating, through order processing, purchasing, planning and scheduling to manufacturing and customer billing.

Yates believes that the system’s capabilities are well understood by staff throughout the company. “It is universally viewed as ‘our system’ and provides the levels of control and information we need to manage the production of more than 100,000 assemblies per month. It has also helped to improve our responsiveness and slash both our order processing and manufacturing lead times,” she reports.

“Today, Pressure Hoses’ turnover has topped the £10 million mark. And thanks to Jobshop, this 10-fold increase in business is still handled by the same number of administrative staff we had 10 years ago.”

Summing up Jobshop’s contribution to the company’s success, Yates concludes: “It is an extremely flexible system that can be tailored to individual customer’s requirements. From our point of view, its capabilities are at the heart of everything we do. In fact, we simply could not run at our current levels without it.”