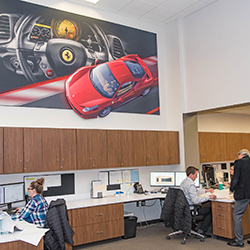 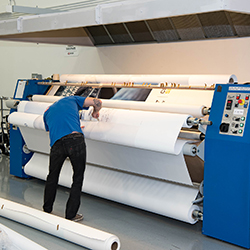 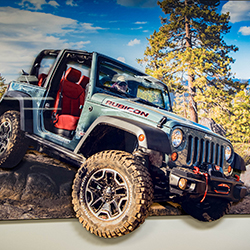 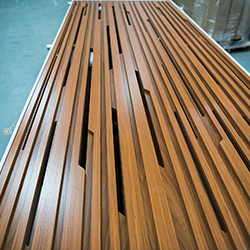 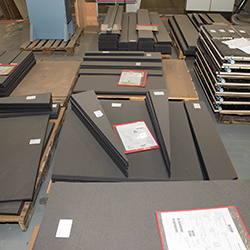 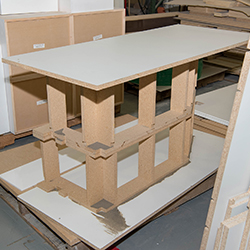 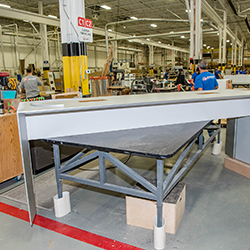 i.M. Branded pushes the boundaries of CABINET VISION to manufacture its custom millwork and cabinetry

We get only one chance to make a first impression, which is why i.M. Branded has built a thriving business of helping clients create impressions that lead to sales and satisfied customers.

As a custom millwork and graphics company, based in Rochester, Mich., i.M. Branded is a one-stop shop primarily for high-end automotive OEMs and dealerships in support of corporate-identity programs.

“A lot of our business is in the high-end automotive showrooms on the east and west coasts,” says Steven Ripplinger, vice president of program development for i.M. Branded. “Our work is about giving automotive customers a unique experience when they visit a showroom. We want them to feel pampered — and we want them to stay.”

Producing high quality, custom designs that all but ooze luxury is all in a day’s work at i.M. Branded, which counts among its clients Rolls Royce, BMW, Aston Martin, Audi, Ferrari, Jaguar Land Rover, and Maserati. Specialty graphics customers also include the Detroit Zoo and the Detroit Grand Prix, and some of the company’s work has been featured on the Chrysler Building.

The company’s owner, Jim Whitehead, got his start by developing a custom snowboard graphic product that allowed riders to create their own snowboard designs. He ultimately diversified and began applying his graphics to custom millwork manufactured by other companies. He eventually realized that, were he able to offer both graphics and millwork under one roof, it would be a significant benefit to his customers.

"After learning CABINET VISION, I would rather use it than any other software because you can do anything with it. CABINET VISION has everything – the modeling, the drawing, and the parametrics.”

In 2010, he expanded his business to include millwork, then moved into a 40,000 square-foot building and populated it with a staff of 20. Ripplinger was brought aboard in 2013 to bring the woodworking side of the business up to speed by implementing technology, hiring project managers, and ensuring that beautiful designs become functional reality.

“I’m all about technology,” says Ripplinger, an accomplished woodworker and businessman who deftly embodies both sides of his role at i.M. Branded. He often makes his way into the office each morning in a collared shirt and sport coat, but he’ll roll up his sleeves in a heartbeat and get to work in the shop if needed.

Once he’d taken the job, Ripplinger took stock of the state of affairs. On the bright side, i.M. Branded was staffed with 10 talented, highly skilled workers. On the somewhat less than bright side, the company’s technology workforce was comprized of one table saw, a broken router, and one “poorly managed” edgebander.

Ripplinger knew that investing in new technology would quickly pay off, so he and Whitehead acquired a CNC router and the CABINET VISION Screen-2-Machine™ solution, by Vero Software, to drive it.

“I think the only way to succeed in this industry now is with technology and to be able to change with the times,” says Ripplinger, who chose CABINET VISION because he had used and was a fan of the Cabnetware solution, also by Vero Software. “The woodworking companies that made it through the recession are all doing well today, and they made it because they invested in technology.”

While Ripplinger emphasizes that technology has helped i.M. Branded become more productive, it’s clear that the company’s seven engineers, all of whom program workpieces in CABINET VISION, take full advantage of the software’s capabilities to reach maximum efficiency.

While CABINET VISION is specifically designed to deal with cabinet-shaped parts, i.M. Branded is able to create complex shapes by customizing the software to suit its design needs. In other words, the company uses software designed specifically to produce box-shaped parts to create just about any shape it can dream up.

“After learning CABINET VISION, I would rather use it than any other software because you can do anything with it,” says Russell Brooks, millwork engineer. “CABINET VISION has everything – the modeling, the drawing, and the parametrics.”

Brooks, who’s experienced in using CAD software to design parts, says that having a solution with which he is able to both engineer and program projects within the same interface is the single most significant benefit to using CABINET VISION.

“If you don’t have a solution that can do everything, you have to know and understand G-code and toolpath, and you also have to know multiple pieces of software,” he explains. “You can create the same design with your 3D CAD system, but that’s as far as it goes.”

To begin a job in CABINET VISION, the user simply enters the dimensions of the room in which the project will be installed and begins drawing the associated millwork, or cabinetry. Once the design is completed, the software applies the toolpath, generates NC code, and sends the job
out to the CNC router.

In addition to being able to design and program projects within one interface, users are able to generate professional-looking renderings, and manage other aspects of the job, including materials and cutlists.

“CABINET VISION makes everything easier,” Brooks says. “If I had to do my job just using CAD software, I probably wouldn’t do what I do for a living.”

Brooks is also able to model hardware in SketchUp CAD software and easily import those models into CABINET VISION, which allows him to insert the hardware pieces into his models, apply toolpath and save the hardware to the CABINET VISION library to be used over and over.

The team also takes advantage of the customization tools built into the software to create user created standards, or UCS codes. CABINET VISION UCS codes allow users to automatically apply preferred construction methods to any project. Those methods are structured using simple if/then statements, which designate, for example, that a particular type of cut should be used with a specified material.

i.M. Branded utilizes about 50 UCSs, and the sky’s the limit when it comes to creating standards that suit the needs of the company. UCS codes are especially helpful in maintaining consistency while automating repeated tasks to shave programming time.

“We’re pushing the limits in CABINET VISION,” Brooks says. “We’ve even enabled it to do automatic miters, which saves a lot of time.”

At i.M. Branded, every aspect of the job — including miters, rabbets, and dadoes — is programmed before the materials are sent to the router.

“We’ve taken CABINET VISION above and beyond what is was designed for,” Ripplinger says. “There is very little third-party work and all the miters are automatically programmed together, so we can build a cabinet in 10 minutes.”

Since 2012, the company has tripled its business and moved into an 80,000 square-foot facility that houses both graphics and millwork. Up to 120 staff members are employed by the company, where Leslie McLain manages the graphics side of the operation.

“You’ll never see another company quite like this, with both the graphics department and the millwork department in one place,” says McLain, director-graphics division.

In addition to creating large-format graphics on an array of media — such as paper, fabric and aluminum — the company often acts as a liaison between OEMs and dealerships to ensure that design intent remains intact. While some dealerships have ample leeway to create designs that diverge somewhat from that intent, others are required to strictly adhere to OEM guidelines.

“We do program work for the OEMs with the images, and help the dealerships fulfill their vision,” McLain says. “To say to a dealer that you can get your graphics and your millwork in a one-stop shop is a one-of-a-kind value.”

For Whitehead and Ripplinger, being able to offer that one-of-a-kind value is made easier with efficient programming and production, as CABINET VISION has enabled the company to significantly reduce manufacturing time.

“It took 12 hours to build a table originally, and it takes three hours to build it now,” Ripplinger says. “Not having CABINET VISION would double or triple the time. Doing this work used to be back-breaking labor, which was so much harder on our people. Now, we can do twice as much work at an easier pace — and yet we can still do it more quickly.”

Business: Graphic branding and millwork solutions developed specifically for the automotive environment and its unique challenges

“After learning CABINET VISION, I would rather use it than any other software because you can do anything with it. CABINET VISION has everything – the modeling, the drawing, and the parametrics.”